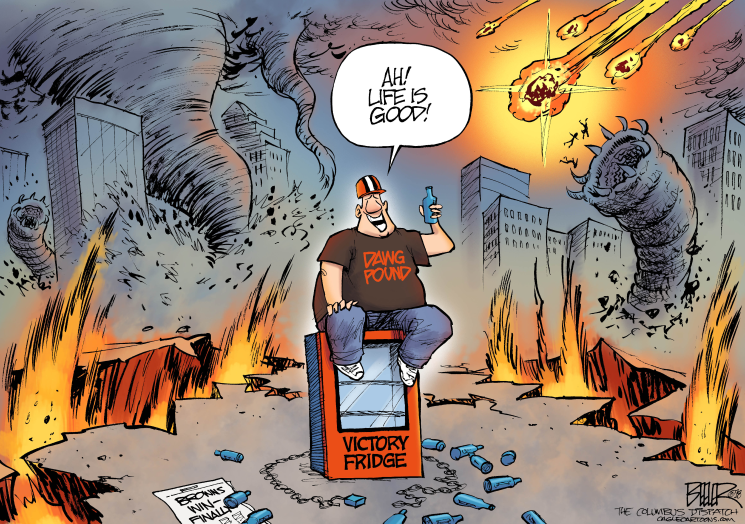 Before the NFL season began, Steelers running back Le’Veon Bell told ESPN, “I want to play. … But I’ve got to take this stand. Knowing my worth and knowing I can tear a ligament or get surgery at any time, I knew I couldn’t play 16 games with 400 or more touches.”

Bell’s “stand” meant refusing to play for the Steelers unless they improved on their offer of $14.5 million for one season. That would’ve made Bell the highest-paid running back in the league and works out to $36,250 each time he touches the football, fumbles included.

Neither Bell nor the Steelers would budge, so the only football he played this season was Madden 2018.

Kevin B. Blackistone, racial grievance columnist for the Washington Post who appears on the sports page, believes future players will be grateful for Bell’s obstinacy, “Bell opted to challenge the league to let a club pay him his worth rather than as an expendable, flesh-and-blood cog under the franchise tag again … Bell decided to … claim ownership of his destiny rather than allow the NFL or the franchise for which he plays to dictate it for him.”

What’s overlooked in the discussion of the tension between what the players want and what the owners say they can afford is the damage past financial decisions have done to the bond between football and the fans.

In the beginning the team that drafted a player had his rights forever and they paid him just enough to keep him from quitting the game and getting a real job. As recently as the 1970s NFL players had off-season jobs to support their families. It took a series of strikes for the players to gain collective bargaining rights and a share of league revenues.

The players portion share of revenue formed the salary cap that limits what each team can pay its roster. This is crucial to league balance and prevents richer teams from stockpiling all the best players at the expense of teams in smaller markets with smaller fan bases.

The downside is veteran players become expendable after only five years. As S–Nation points out, “… the main effect of a hard salary cap was the release of higher paid veteran players in favor of younger players still playing out their cheaper rookie contracts.”

That’s a fine personnel philosophy if you’re running a bank or a car lot. No customer in his right mind forms an emotional attachment to bankers or car dealers. It’s different with sports teams. A soul-less, numbers-first philosophy make keep the accountants happy, but it’s a slap in the face to fans who have an attachment to players they may have met or with whom they’ve vicariously shared great moments in football.

It produces a two-tiered NFL. Well-paid veteran nomads roaming from team to team for higher contracts before Father Time finally tackles them and newbies marking time until they can leave to chase a bigger contract.

No father enjoys explaining to his son why the Packer he idolizes is no longer a Packer, but is now playing for a rival. Why fight traffic, pay exorbitant ticket “convenience fees” and be frisked entering the stadium to watch players who are just passin’ through?

Blackistone is angry the league treats players like “expendable, flesh-and-blood cogs.” He’s correct. This Rule of the Accountant undermines the connection between fans and players who are the team. (Only vendors cheer for owners and management.)

A better policy would be to have a player’s impact on the salary cap be significantly reduced the longer he stays with a team. Currently the only players who have ten-year careers with one team are quarterbacks and kickers. The other 20 roster spots are revolving doors.

Player careers are brief. Owner careers are perpetual. Players deserve to maximize earnings during their moment in the sun and owners need profit to pay the players, the light bill and lobby politicians for more taxpayer stadium subsidies.

The people taken for granted in this dynamic are the fans and it is damaging intangible bonds.

Yahoo finance reported the NFL lost thousands of fans last season who were fed up over politics, had no interest in the teams or some other reason. A wise league would try to rebuild the bond between teams and fans. A good way to start would be making it easier for players to finish their career with one team and one set of fans.