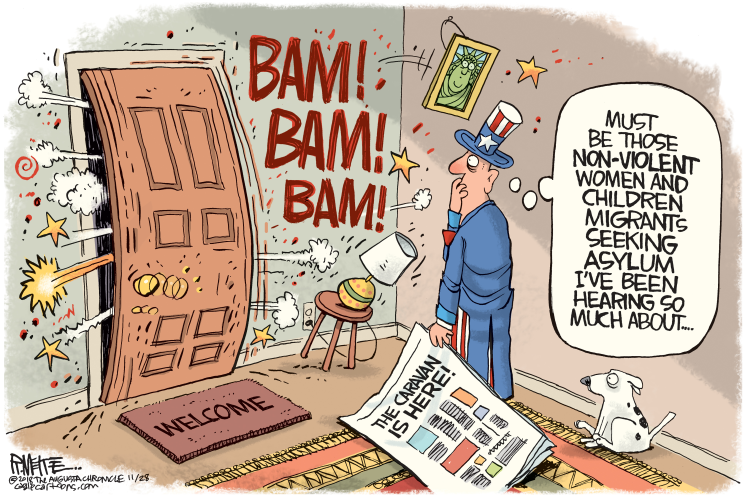 Arlandria is a sanctuary neighborhood in a sanctuary city next to a sanctuary county in the Commonwealth of Virginia. Residents there are worried about a caravan of Prius-driving invaders that threaten to change the culture of the neighborhood.

This concern requires some clarification.

Arlandrians aren’t opposed to semi-literate identity thieves sneaking across the border to depress U.S. wages, burden the schools and require the rest of us to ‘Press 1 for English.’ Those folks might be relatives! Residents aren’t opposed to Hispanic immigrants gaming the ‘asylum’ system to take advantage of U.S. welfare. Nor are they against chain migration that U-Hauls entire Latin American villages north.

Why that would be wrong! That sort of thinking is classist, ‘racist’, xenophobic and anti-Democrat.

What toasts their tamales is the prospect of well-paid, highly literate, childless Amazon workers moving into their “transplanted Hispanic culture” and buying a house while making a significant contribution to the tax base.

The Washington Post’s coverage of this example of NEMPTism (Spanish for NIMBY) is additional proof irony is dead on the left. The WoePost reporter can’t see the humor in a neighborhood that turns a blind eye to illegals protesting when citizens might move in, too.

This quote says it all, and in Spanish no less, “We have to organize, we have to be unified, we have to have one objective, one solution,” Luis Salmeron, a 17-year resident, said through a translator. “This is as much for me as for our kids, our grandkids and future generations. We want to be a collective force to preserve our community.”

Arlandria is where “More than half of the residents are younger than 30, and nearly half were born in Latin America, according to the 2017 U.S. Census American Community Survey.” And “men lean on cars to discuss in Spanish the issues of the day.”

In the mid-1980’s so many “residents came from a town called Chirilagua, fleeing civil war” the neighborhood was soon called Chirilagua. That was then. Today these refugees enjoying the laughably termed “Temporary Protected Status” are still there lingering on through the decades.

Gentrifying Gringos have already made attempts to impose their will on the neighborhood. “Some Arlandria residents still resent a developer who renamed a strip shopping center in the heart of their neighborhood “Del Ray North” and rented space to an upscale pet store.”

Why the nerve of that capitalist! There is no market for Corgis in Arlandria.

Now Amazon is building a headquarters in Arlington and Virginia Tech is constructing a $1 billion graduate campus in the vicinity. Employees, academics and students will have to live somewhere and Arlandria residents are thinking “there goes the neighborhood.”

That’s why la gente are up in arms. Or at least the gente with a media connection.

Sinister market forces are at work right now. The man who owns the Tiger Market grocery and deli was presented with “a buyout offer that would pay him $1.5 million more than what he owes on the property” and activistas want to put a stop to those shenanigans muy pronto.

Meanwhile the Tiger Market jefe intends to stay put and upgrade his inventory to attract “more affluent customers.” It’s unknown whether activistas will consider the addition of kale and free-range tofu to be an insult to the barrio.

The owner of a barber shop believes Amazon means jobs for his clients. The non-entrepreneurial agitator fighting Amazon believes, “What is coming is displacement.”

And there you have it. It was one thing to flee MS-13 in El Salvador and only to discover the gang is now next door. It’s another kettle of pez entirely to flee Amazon in Virginia.

The situation does disprove one conservative complaint regarding mass illegal immigration. These Arlandrians have taken a tentative step into the much despised “melting pot” and potential assimilation. They now fit quite nicely into the mold of the left’s permanent grievance industry.