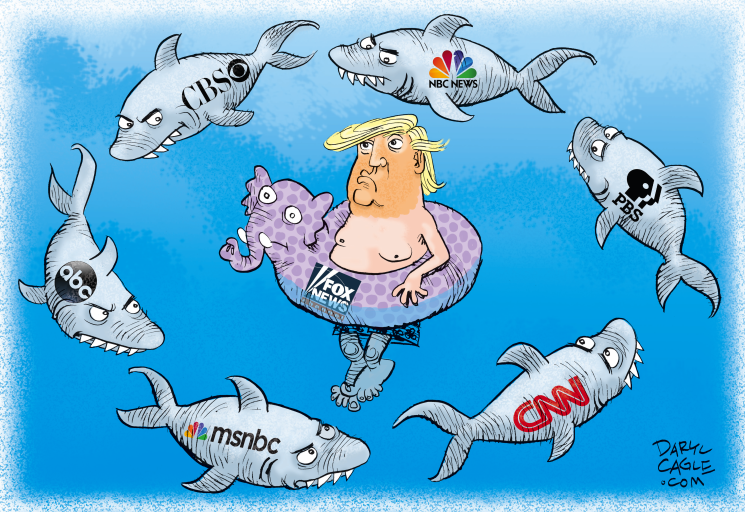 Good news for the suicidal or just plain idiotic who plan on visiting one of America’s outstanding national parks this summer. One can now make a mistake and fall befuddled, surprised or screaming to your death off one of our scenic cliffs without any worries that your demise will be drawn into some sordid political drama with lugubrious MSNBC or CNN performers piling on.

Take 69-year-old Cynthia Ackley, whom NBC News tells us died after experiencing a 200-foot fall from the Grand Canyon’s South Rim. In April 2019 it’s just another unfortunate tourist death that occurred after getting to close to the edge.

Ackley’s body was retrieved at what was no doubt colossal taxpayer expense, she’s pronounced dead and life – for the rest of us – goes on.

That would not have been the case if Cynthia had taken her header in January. During that month her death would have been deemed a national disgrace. A stain on the American social fabric and recriminations would have been flying as fast as the Opposition Media could type stories or fulminate on the airwaves.

January was the month of the government shutdown. The Washington Post (better known as the WoePost for the dolorous tone of most of its ‘news’) practically transformed itself into the Shutdown Privation Report.

I marked Peak Privation on the day the WoePost actually ran a headline that read: “Three dead in national parks as shutdown wears on.”

And Trump may as well have pushed the tourists off into space because he received all the blame. The Orange Outrage in his usual sloppy, haphazard fashion shut down the government, but he forgot to disconnect gravity. Tourists who fell off cliffs received 100 percent of the effect of their fall.

The WoePost’s hysterical Juliet Eilperin wrote, “Three days after most of the federal workforce was furloughed on Dec. 21, a 14-year-old girl fell 700 feet to her death at the Horseshoe Bend Overlook, part of the Glen Canyon Recreation Area in Arizona. The following day, Christmas, a man died at Yosemite National Park in California after suffering a head injury in a fall. On Dec. 27, a woman was killed by a falling tree at Great Smoky Mountains National Park, which straddles the borders of North Carolina and Tennessee.”

Even trees attack when Trump shuts down the government.

She also pointed out that during the 1995 and 2013 shutdowns Clinton and Obama both closed national parks. Not out of a concern for safety but because, as Eilperin admits, it was a way to punish Republicans by denying people with enough common sense to not to fall off a cliff access to the parks for which their tax dollars pay.

Diane Regas, president of the Trust for Public Land, even sent a letter to Trump begging him to close the deadly, malevolent landscape.”I think we all know that not having bathrooms is a nuisance. What I think people forget is, not having adequate sewage treatment can be dangerous,” Regas explained.

Something tells me shutdown deaths weren’t causes by tourists loosing their balance while pooping off the edge of a cliff because the Porta Potties were full.

Today the shutdown is over. The parks are fully staffed and everything is back to normal. Park visitors are bar,’coded as they enter and assigned a personal guide. Extra,’strength invisible fences keep daredevils away from dangerous overlooks. And roving teams of rangers – on the lookout for fence jumpers – patrol the canyon floor with nets to catch the falling.

Or maybe not. NBC News reports that after Ackley’s death, “there are no new warning signs [and] park staff were not paying extra visits … to warn thrill-seekers to back up from the rim’s edge.”

“People walk behind the railings, over the top of railings, hang their feet over the edge. So more signs is not necessarily going to encourage more safety,” John Quinley, a National Parks Service spokesman, said.

The truth is gravity works regardless of whether or not government employees are getting timely paychecks. People will risk death in an effort to shoot that selfie with the exciting frisson of potential death regardless of who occupies the Oval Office.

The only difference is if one falls to his death today the leftist stenographers in the OpMedia will leave the family in peace instead trying to turn a family’s private sadness into a public political attack. The dead have served their purpose and have been discarded by what passes for our news media.

by Jase Graves
On a recent frigid day in February as I was entering Target to defrost my nose hairs and purchase a designer toilet brush, I noticed that they already had an array of skimpy women's swimsuits on display, which dredged up some disturbing memories ...