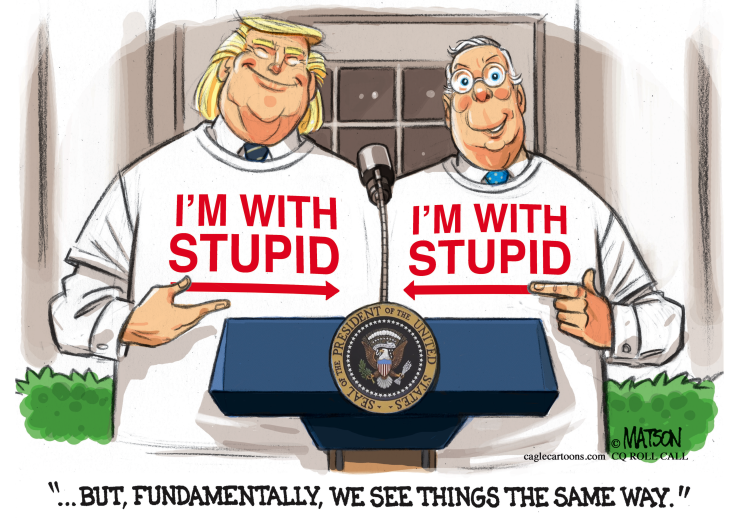 This week we have one of those rare occasions when government priorities and government funding match exactly. As Fox News reports, “Loose change left at airports may be used to help fund border operations.”

If you need additional proof Washington, Inc. doesn’t give a damn about stopping and reversing illegal immigration, this should do it.

Maybe Trump will order the Pentagon to go through the seats looking for nickels after Nancy Pelosi commandeers a military jet to take her home on weekends.

The problem is the Senate. Even when Republicans controlled the presidency and both houses nothing was done. People are tired of an immigration policy that only works against citizens and the Chamber of Commerce conservatives who refuse to change it.

These primary opponents are a start, because without a change in the Senate, retaking the House and re-electing Trump will be as meaningless for border enforcement as it was in 2016.

The only way for Trump to send a message that he demands cooperation from the Senate is if he personally defeats his main roadblock: Curator of the Senate Mitch McConnell.

McConnell has treated Trump and his agenda with thinly disguised disdain since the election. McConnell’s claim to fame is mere longevity in office, as if he were a turtle only to be valued by how long he has been in existence.

McConnell is completely undisturbed by the single most important issue facing the nation – the approximately 30 million illegal aliens already living inside our borders.

Instead of bucking the cheap labor lobby that supports the world’s first taxpayer,’-subsidized invasion, McConnell proudly introduces trivial legislation to raise the minimum age to buy tobacco to 21.

“Youth vaping is a public health crisis,” McConnell announces while the real crisis is bussing the table in the restaurant where he eats.

As long as McConnell is ‘leading’ the Senate, Trump’s immigration agenda and reducing the size of government is dead. (Although Mitch and Jared – that negotiating fool – might be able to work something out on keeping Mitch’s wife as part of the cabinet during the second term, too.)

The Curator is gearing up for his 2020 re-election by trumpeting his two biggest accomplishments: Acting as the Judicial Human Resources Dept. for the White House and increasing the national debt.

Instead of tweeting about whatever has penetrated his thin skin this morning, President Trump should be lining up and funding a primary challenger for McConnell. Mitch’s approval rating among Kentucky voters is what pollsters term “underwater.” Fifty,’six percent disapprove of job his performance while only 33 percent approve.

But wait until they find out about his get tough policy on Juul!

Trump on the other hand is vastly more popular. His approval rating is 61 percent compared to a disapproval of 35 percent. Even in 2016 Trump was more popular. He carried Kentucky by 30 points, while McConnell two years before won by only 16.

Challenging McConnell in the primary isn’t exactly a suicide mission. His last challenger, Matt Bevin, is now the state’s governor.

If Trump recruited a primary challenger and then put his charisma and his cash behind the challenger I believe the Mitch the Turtle would be soup. More important, it would send a message to the rest of the housebroken conservatives in the Senate that there are real costs to opposing the president’s agenda.

And so what if the challenger loses? Could McConnell pass any less of Trump’s immigration and border security legislation? How much more passive aggression does the Curator contain?

Either Trump changes the composition of the Senate or his administration will have accomplished less than the Bush Interregnum. The only difference being Trump’s was noisier.