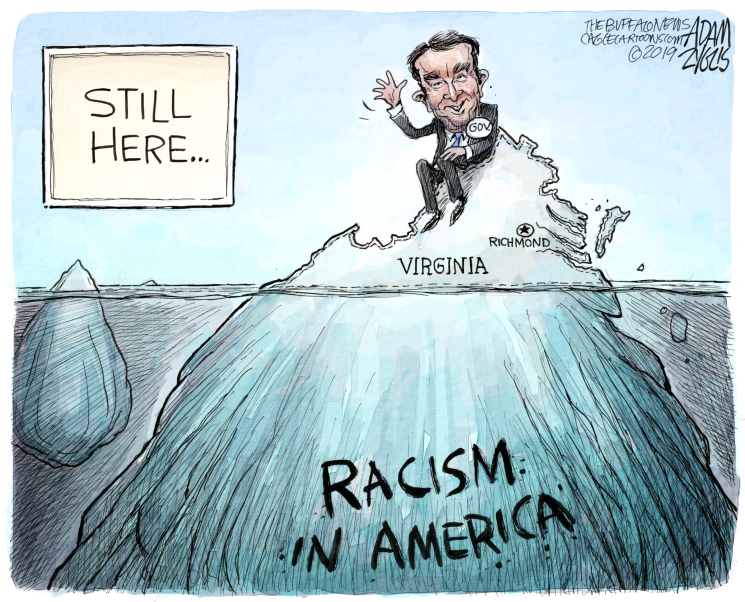 I've often wondered what would happen if a politician simply ignored heated demands that he resign in shame over some leftist grievance. Naturally, I assumed it would be a Republican holding out in Assad-like resistance to tires burning in the street and Twitter mobs lobbing 280-character barrages.

Mistaken assumption. We now have three Democrat politicians in Virginia holding on to office in spite of demands from their own party that they resign.

When I last wrote about The Three Carambas in February, Democrats were watching in horror as the political dominoes fell. As each one toppled, the left's demands for racial and sexual purity became less and less strident.

The Richmond crisis involved the top three statewide officials in the Commonwealth.

It began as a rock-and-a-hard-place college photo of Gov. Ralph Northam (D-Shinola) where the governor was either sporting blackface or was dressed in Klan formal wear.

Northam began a frantic performance of the Responsibility Hokey-Pokey (I'm desperately hoping neither Amos nor Andy ever made a reference to this dance). First, he was in the picture. Then he was out. Then Northam shook it all about and admitted he had worn blackface when he entered a Michael Jackson contest.

How portraying a child-molester was an improvement over insulting black people in general was never explained.

Northam looked like he was toast, which doesn't require the application shoe polish.

With Moonwalk out, Lt. Gov. Justin Fairfax would take over. Fairfax was young and black it would be perfect symmetry justice.

That lasted until two women accused Fairfax of sexually assaulting them. Both were credible. Both were black. And both were Democrats.

Northam and Fairfax would be embarrassing, but the job would fall to Attorney General Mark Herring, who had already called for Northam's resignation. Sure, Herring was as white as Col. Sanders, but he had already proven himself a reliable ideological rubberstamp for the left.

Then the other can of shoe polish dropped. Herring said he had also participated in a pigment party, although he didn't offer any photographic proof.

After Herring was the abyss.

Next in the line of succession was Speaker Kirk Cox and he was a Republican. Suddenly institutional racial outrages were youthful dalliances and innocent until proven guilty was once again applied to charges of sexual assault.

Almost four months later all three are still in office. Northam has been laying low, looking for the real killers. For some strange reason the medical school that published the yearbook hired an expensive Richmond law firm to find out who was pictured on Ralph Northam's yearbook page.

This was a little like hiring a law firm to find out who's buried in Grant's Tomb.

There are four photos on the yearbook page titled "Ralph Shearer Northam." The non-mystery photos are a portrait shot, a cowboy hat with beer shot and a leaning against a sports car photo. The fourth is the two-shot of the blackface and the Klansman that mysteriously appeared on Northam's page. Both are holding a beer and it's the same brand Northam holds with his cowboy hat.

The law firm disagreed that nothing propinqs like propinquity and found that even though the photo is on Northam's page, who's pictured is unknown.

Justin Fairfax has been busy, too. He hired a polygraph expert - the same one whose results were used to attack Judge Brett Kavanaugh - and the expert concludes Fairfax believes he didn't assault either woman. And that's good enough for Fairfax.

Finally, there's Mark Herring. He's on a racial reconciliation tour according to the Washington Post. And in that lies the explanation for Northam and Herring's survival. Virginia's black leaders have realized these two politicians - desperate to keep their tarnished jobs - are now what amounts to personal Reparations ATMs.

There is no chance Northam or Herring will oppose black Democrat demands for anything. When Northam is in public he always has at least one black person near for protective cover and Herring is doing the same.

Fighting 'systemic racism' and keeping every black Democrat happy means keeping their job. Consequently, until their terms end no ask is too big.