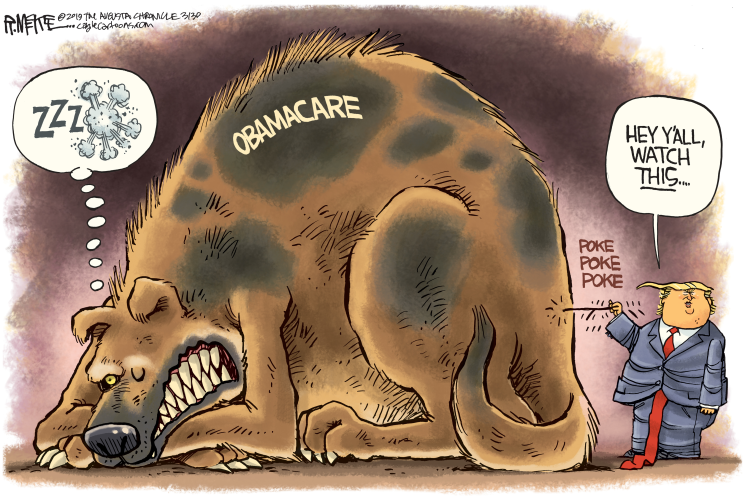 President Trump's second go-round with healthcare pricing marks the first time I can recall a consistent effort on his part to achieve a goal in the face of opposition. Something sadly lacking in the immigration fight.

January was his first attempt. The Department of Health and Human services required hospitals to begin posting "chargemaster" rates for medical procedures on their websites. The goal was to give consumers access to price information on medical procedures that had been negotiated with the government.

The chargemaster is a typical government conspiracy against the taxpayer. It's so complicated only industry insiders and federal employees have even a remote chance of grasping any useful information. It lists every possible treatment a customer can be subjected to, broken down into individual components.

Trying to estimate what it would cost to deliver a baby is like determining the cost of a new car by adding up the price of every individual part contained in the car. Even worse, those prices don't reflect lower negotiated prices. That level of complexity and irrelevance still wasn't good enough for the Uriah Heeps inhabiting hospital executive suites.

The regulation specified chargemaster prices had to be published in a "computer friendly" format, so some of these parasites published the data in a format only a computer could understand. NBC found,"... [hospitals] made their prices available as JSON or XML documents, file formats more often used by programmers and data analysts than consumers."

Back to the drawing board.

This time Trump signed an executive order directing bureaucrats to write a regulation requiring hospitals to post prices including "standard charge information, including charges and information based on negotiated rates and for common or shoppable items."

That vagueness is what bothers me. What qualifies as a "shoppable item." Is a bandaid shoppable, while a tonsillectomy isn't? Knowing the price difference between a bandaid at MegaCare and CVS is not going to be useful, while knowing the difference between the cost of hysterectomy (I'm trying to be inclusive) at Catholic Charity Hospital and Pagan Price-Fixer Hospital is.

How much usable information consumers gain from Trump's executive order really depends on whether or not the bureaucrat writing the regulation plans to go to work for a hospital or insurance company after he leaves government 'service.'

Even that ominous prospect for consumers is too uncertain a variable for the Healthcare Industrial Complex. According to them any knowledge is a dangerous thing in the hands of a civilian. Rick Pollack, a professional liar for the American Hospital Association, claimed during an interview with Modern Health Care, "Publicly posting privately negotiated rates could, in fact, undermine the competitive forces of private market dynamics, and result in increased prices."

My challenge to readers is to add the word 'cars' or 'new homes' to that sentence and try not to laugh.

The other disquieting news is that price disclosure could be interpreted to mean out-of-pocket cost for the patient. High health insurance deductibles sometimes provide a perverse incentive. Some potential patients may choose the highest out-of-pocket expense to satisfy all hisdeductible and make the rest of that year's care "free."

Making a dent in healthcare costs requires a two-pronged approach that provides information to consumers and an incentive to price compare.

Second, give consumers an incentive to choose a lower price by sharing the saving with him. For instance, charges for a knee replacement vary from $32,500 to $22,700.

To ensure this wasn't a one-time-only cost-conscious decision by the consumer, the insurer could continue to apply ten percent of procedure savings to future deductibles.

My proposal is simple, clean and understandable and it will work to lower healthcare costs. This is why there is no chance swamp bureaucrats will follow my advice.

Instead I fear we will still be stuck in a situation Sen. Angus King (I-ME) aptly described to the Wall Street Journal, "I know of no other business [healthcare] where you have no idea what something's going to cost, and you can't find out even if you ask."