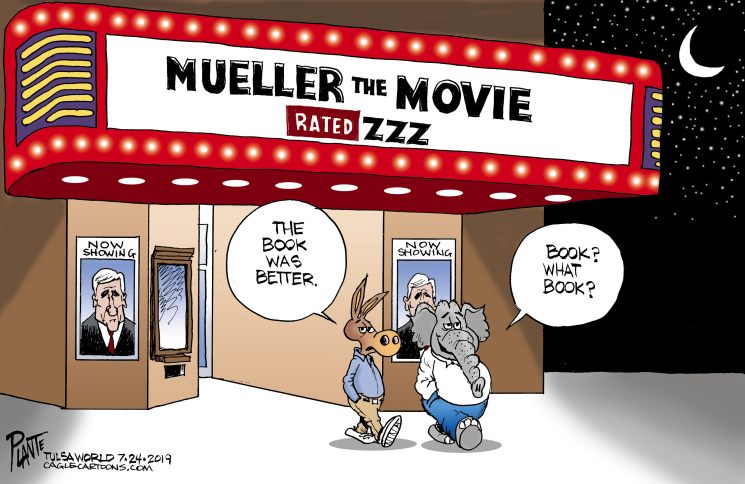 There are some questions that just aren't asked at a hearing because the questions are superfluous. The answers are part of everyone's data base. At least everyone who counts.

When Special Prosecutor Robert 'Ahab' Mueller testified before the House I would've asked about FISA warrant applications. Why Sen. Barbara Boxer was warned about a Chinese spy in her office but Trump was put under surveillance. And why Republicans were indicted and Democrats weren't.

It never would have occurred to me to ask Mueller if he was familiar with the Steele Dossier and Fusion GPS. Knowledge of those two entities was taken as a given.

Only everybody didn't know.

As the rabidly anti-Trump, pro-Russia-Collusion Politico reported, when Mueller was asked about the Steele Dossier and Fusion GPS, "He said he was unfamiliar with the so-called 'Steele dossier'" and he was equally "unfamiliar" with Fusion GPS.

The Steele Dossier was the basis of Russia collusion delusion. It was used to get a FISA warrant to spy on the Trump campaign. It is the genesis of the entire investigation.

Fusion GPS is the band of sleazes who tried to peddle the lies contained in the Steele Dossier to law enforcement and the media. One of the Fusion staff is married to a top FBI official who influenced the investigation.

Without Fusion GPS there is no Steele Dossier and without the Steele Dossier there is no special prosecutor. This entire investigation and its corruption of the FBI and Justice Department was like Watergate if Woodward and Bernstein were the burglars and then tried to pin the job on Nixon.

How could Mueller not be aware of both?

A brief Google search on Fusion GPS produces almost 92 million hits. A news search has 836,000 references. A similar search on Steele Dossier has 2.3 million general hits and 75,000 news mentions. Federal retirees are always griping about their pension, but surely Mueller can afford an iPad and a Panera gift card.

The Opposition Media made Ahab Mueller into an icon of integrity and gravitas. That lasted until he opened his mouth. Mueller sounded like the confused, out-of-touch senior citizen the left claims Donald Trump is when they have dreams of invoking the 25th Amendment.

Mueller was only there to give the investigation a patina of probity while the 19 Angry Democrats went to work. Evidently, Mueller showed up at the office looking iconish, played some computer solitaire, went home to watch Walter Cronkite and then to bed.

This explains why the investigation went so far outside the parameters of the Dept. of Justice brief. Mueller couldn't run a canasta game at an assisted living center. The 19 Angry Democrats kept him topped up on Ensure and out of the way.

It was like Howie Carr said on the radio, "I asked why [Mueller] was bringing a lawyer with him, when it was clear from his earlier press conference at the Justice Department that what he really needed was a nurse."

Even if the Justice Dept. figured out something was amiss they lacked the courage to rein in the investigation. Trying to supervise what was going on in the Special Prosecutor's Office would likely result in leaks to the OpMedia's Hallelujah Chorus claiming "interference." Then the predicate is set for "obstruction charges" thrown back at the Dept. of Justice. The Special Prosecutor's Office was an iron triangle.

Mueller's abysmal performance did prove me wrong. Ahab Mueller wasn't the captain of the Pequod. He's the figurehead. His testimony was like watching the movie 'Cocoon' only Mueller was still at the bottom of the pool.

Former Cong. Trey Gowdy summed the performance up best when he said, "The person that learned the most about the Mueller Report today was Bob Mueller."

Rachel Maddow wants Democrats to dig a deeper hole. She's says Mueller's performance, "lights a fire under the need to speak to the people on his team who actually did the work." Mark Levin is good with that, "Andrew Weissmann should have been testifying today... But they're protecting Weissmann because he is the Svengali behind all of this in my humble opinion."

One thing is certain. After his performance this week, Ahab Mueller is one of the few Trump haters who won't cashing in on the lecture circuit.