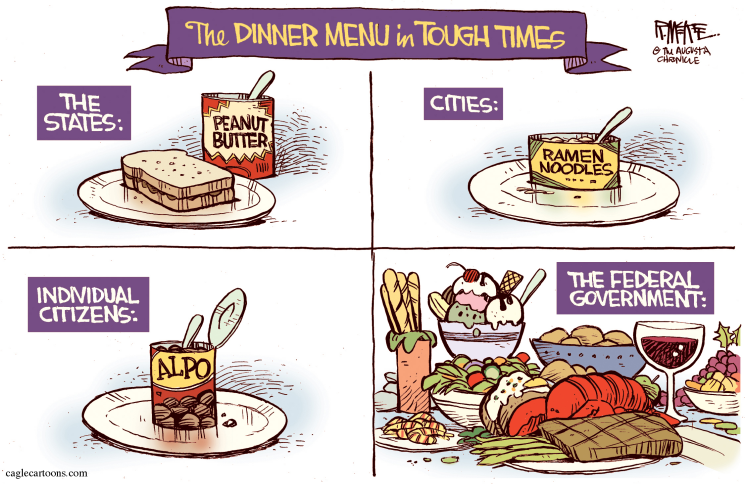 The Washington Post (WoePost to regular readers) recently had a very ominous quote. Sandra Salstrom, a lobbyist for the American Federation of Government Employees, told an eager stenographer, "It seems like if they are successful here, this could just be the tip of the iceberg. We don't know who's next."

What inhumane, outrageous and bigoted Trump administration policy has attracted the attention of Ms. Salstrom? Has someone purchased a one-way ticket to Somalia for Rep. Ilhan Omar?

Not exactly, but the outrage does involve travel. The Trump administration is planning to move portions of the Department of Agriculture and the Bureau of Land Management closer to where agriculture happens and land is managed.

Placing swamp bureaucrats closer to the people over which they rule is evidently inherently offensive. Rep. Steny Hoyer (D-Barnacle) warned, "In the White House, there is, among some people, a real disrespect for federal employees, animated by their disrespect for the government generally. So if you're hostile to government, you're then ... hostile to those who work in government."

For the USDA this means part of that behemoth will be moving to the Kansas City area. And if I lived in either Kansas or Missouri, I'd be offended. But the left is acting like the destination really is Somalia - not that there's anything wrong with that!

The WoePost, which slavishly covers the federal workforce, even has a swamp columnist. Joe Davidson writes the impending move of the Economic Research Service portion of the USDA has caused employees to "quit in droves."

Which only proves the "drove" isn't what it was formerly cracked up to be. The total head count of this "drove" was six employees. That doesn't even qualify as a crowded elevator, but it's typical of the sky-is-falling response to any change in the bureaucracy.

The average employee attrition at ERS had been about one-per-month. After Sec. Sonny Perdue heralded the crack of doom and the arrival of Mayflower, the attrition rate doubled to two-per-month. For a 300-person agency the former rate was 4 percent and the doom-laden rate was 8 percent, which is still much less than the nationwide attrition rate for "government, education & non-profit employment sector" of 11.2 percent.

Even the relatively humane approach of the Trump administration is twisted into a choice between life among the wretches who pay their salary and professional suicide: "The Agriculture Department is offering employees a rare choice: accept a forced transfer to a post 1,000 miles away or be fired." Having a choice certainly beats the George Clooney treatment where an employee is escorted to a conference room while his office is packed up in his absence. But that's the savage private sector, not the humane, understanding federal government.

We're also supposed to be concerned about the priceless "scientific talent" the nation will be using, but when you remember it was USDA "scientists" that foisted the high carb - low fat diet on the nation that resulted in an obesity epidemic, I think we can get along just fine without them.

And they can take their BMI index, too.

The Bureau of Land Management is also pulling up stakes. The plan is to move "84 percent of the agency's headquarters staff west of the Rockies." Coverage there was equally grim. "This announcement is deeply unsettling, and has created a lot of uncertainty for us," the participant said. "The best part of my job is my co-workers, and they are working to tear us apart for purely political reasons. I'm sick to my stomach."

I'm wondering when we'll start seeing photos of former USDA employees sitting on the top of railroad cars heading to Canada for asylum when this item caught my eye, "Other employees embraced the reorganization, according to the meeting participant, asking how early they can leave Washington."

Yet, strangely enough, there were no quotes or additional information from employees happy with the impending move.

It's tough to take this wailing and gnashing of teeth seriously when it's accepted government practice to shuffle military families like balls in a bingo drum, but somehow moving a bureaucrat is cruel and unusual punishment.

Conservatives should cheer this Trump initiative. It's not shrinking the size of government, but it is breaking up the concentration of bureaucratic empire-building in the metro D.C. area. Why shouldn't the entire USDA be moved to the Midwest where it's closer to the farming heartland? Why shouldn't the Department of Energy be moved to an area where energy production is supported and not condemned?

Best of all, maybe the work habits of average citizens will rub off on the newly-arrived swamp denizens.