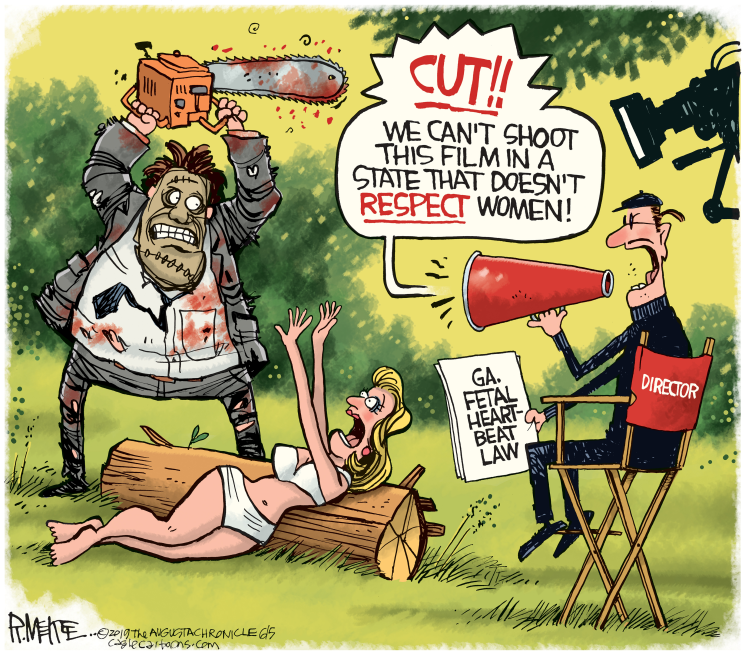 ‘The Hunt’ has hit a shunt and count me among the deeply disappointed. The Hollywood Reporter informs us, “Universal has decided to scrap the release of ‘The Hunt’ – an R-rated satire in which elites hunt “deplorables” for sport – following a series of mass shootings across the country.”

Many conservative commentators hail this as a victory. Take that, Hollywood degenerates!

Only they’re wrong. Any time conservatives are celebrating censorship we’re both losing and hypocritical. The more conservatives who see this movie the better. Banning it only helps the left.

‘The Hunt’ is a visual demonstration of just what Hollywood, Ivy League elitists and the Twitterati really think of Trump voters. The Sonderkonservatives who believe their Never,’Trumpism or I,’only,’voted,’for,’him,’because,’of,’trade,’policy disdain will save them from being lumped in with MAGA,’hat wearers are in for a shock. Paying the illegal mowing their lawn more than the minimal wage won’t erase the stain.

In culture wars anyone who’s not a leftist is the enemy. One of the victims in the movie is targeted because he’s not blood thirsty enough.

His mistake was being Pro,’Life.

The movie would’ve proved to be Jolt Cola for the country’s complacent conservatives who sleep placidly, safe in the mistaken belief the left’s animosity doesn’t involve them. When some washed up female ‘comedian’ poses with a picture of Trump’s decapitated head, they’re briefly aroused and paying attention. Then they hit the snooze button again.

It’s not their concern. They don’t own a MAGA hat. They aren’t a baker or a florist. They don’t make political contributions. And Roscoe will be sick the day gender,’benders come to Show & Tell.

Besides, Trump has Secret Service protection.

Only the people being hunted in this movie aren’t White House staffers, political appointees or activists with a Trump bumper sticker on the pickup. They are rank,’and,’file Deplorables. Sitting in a darkened theatre listening to the audience laugh when people like you die in a ‘satire’ would have proven to be an enlightening experience.

Prey people in this movie can be found at any gas station, Walmart or football stadium. They wear caps, cowboy shirts and own guns.

Fox News reported, “The violent, R-rated film from producer Jason Blum’s Blumhouse follows a dozen MAGA types who wake up in a clearing and realize they are being stalked for sport by elite liberals.”

THR shares this bit of dialogue from one of our unhappy betters, “At least The Hunt’s coming up. Nothing better than going out to the Manor and slaughtering a dozen Deplorables.” The action that follows ‘features guns blazing along with other ultra-violent killings as the elites pick off their prey.'”

The El Paso shooter had his manifesto. This is the Hollywood manifesto.

In a nice bit of symmetry Hillary Swank stars as a hunter. She’s killing the voters her candidate Hillary Clinton first called ‘Deplorables.” Swank’s murder of people just like you and me is described as “deeply rewarding.”

We know ‘The Hunt’ is a fantasy because rich leftists know how to use a gun. An accurate movie would have had the One Percenter’s security team ,’ people a notch above Deplorables and willing to take orders ,’ do the killing while ‘asylum seekers’ acted as beaters and drove the victims toward their death.

The One Percent would watch via drone on a Jumbotron.

Regardless of its rich Democrat portrayal, this movie should make you snooze alarm conservatives start thinking.

This is an entire chain of individuals and companies that know with certainty they are immune to any repercussion.

That alone should begin to worry you. Where else do the losers of an election freely discuss killing government supporters? Certainly not in a genuine fascist state. When Hitler became Chancellor of Germany, with only 37 percent of the vote, Fritz Lang wasn’t making movies about hunting Brown Shirts.

Hollywood feels free to do it here because they know Trump isn’t really a fascist and there is no danger. The left controls the culture, college, government education, corporate boardrooms, the media and the permanent government bureaucracy.

All the Deplorables had was their vote and that has condemned them in the eyes of the left.

There are no neutrality agreements or conscientious objectors in this culture war. It’s binary. You are with the left or you are the enemy. It’s high time snooze alarm conservatives woke up and smelled the culture burning. Seeing ‘The Hunt’ would have helped.

Defending My Church When No One Else Will

by Christine Flowers
The accusations of pedophilia in the Catholic church have never faded from the public eye, and while there are moments when other cataclysmic events push the tragedies a little further back from our immediate view, the fact that children were ab ...
Yes, Trump’s Interference With Our Institutions is That Bad

by John L. Micek
Susan Collins was absolutely right about this much: President Donald Trump has learned his lesson. And he's learned it by heart. Thanks to the Senate's cowardly abdication of its responsibilities, the Republican president now feels absolutely em ...
Bringing Chocolate, Peanut Butter, and Americans Together Again