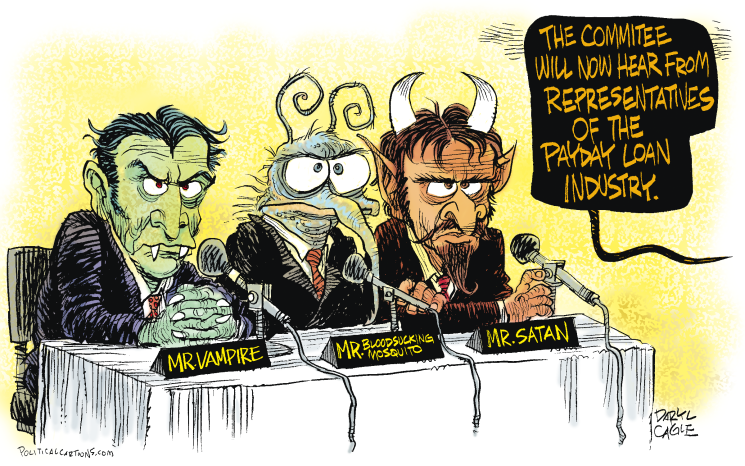 Don't even try to put lipstick on this pig.

Anyone who thinks California Assembly Bill 539, which would cap interest rates at 36 percent on installment loans of $2,500 to $10,000, protects consumers should think again. In fact, a gaping hole in the bill, engineered by Assemblywoman Monique Limon, would continue to allow enormously profitable predatory loan companies to pressure unwary consumers into buying "add-ons" that can pile hundreds or even thousands of dollars onto the final payoff.

A--539 is cronyism at its worst, cooked up by well-lobbied Democratic leaders whose campaign coffers are fattened by three huge loan companies - OneMain, Opportun, and Lendmark. These operations rake in hundreds of millions of dollars every year by selling consumers expensive add-ons like credit insurance that they don't want or need. They are bad players with an exclusive arsenal of 36 percent products, bent on using this bill to drive good players, who charge more up front but are honest with their clients, out of the market.

Californian Ray Haynes, always a thoughtful voice, explains the scheme in a recent blog on Flashpoint.org:

"First problem, only three of these small loan lenders (OneMain, Opportun, and Lendmark) have a 36% loan product, so automatically you are pushing competitors out of the market with the legislation. Once again, what's wrong with that? Two things, if real market forces were at work, it would be natural for a 36% loan product to beat a 100% loan product in a free market, so why is a regulation necessary? One would expect market forces to resolve the problem without A--539. As important, if a business could make a profit with a 36% loan, why wouldn't all the businesses in that market reduce their interest to compete?

"That is because the three lenders who offer these lower interest rates are not entirely honest with the borrowers. They engage in a practice known as "loan packing," that is, they use undisclosed or deceptive practices to increase their profits by adding on "products" that are of little value to the customer, but create large amounts of revenue to the lender, that more than make up for the lost interest.

"So, if you are an honest broker of high risk, low dollar loans, you charge 50% to 100% interest on the loan to make up for the high default rate by non-creditworthy borrowers. If you are a dishonest broker, you lure the borrower in with a promise of lower interest rates, then stick them with add-ons, like credit insurance or "debt protection" products which add lots of revenue to the lender, with little benefit to the consumer. So, if a competitor wants to compete with the dishonest companies, they have to be dishonest too. Some companies won't do that, so they just leave the market."

According to the on-line publication The Resurgent, Lendmark has actually hired Washington D.C. Republican lobbying firm Harbinger Strategies to push the 36 percent scheme in Congress, where newly famous lefty Rep. Alexandria Ocasio-Cortez is supporting a national version of the California measure because she naively believes it's pro-consumer.

Let's be clear. There is a legitimate and necessary place in the free market for honest short-term lenders. When conventional banks slam the door, short term, high-interest loans can meet urgent needs.

According to a recent Federal Reserve Board study, 40 percent of Americans do not have $400 on hand to meet an emergency situation. Every year, hundreds of thousands of Californians living on the edge, most with less than stellar credit, take out short-term installment loans from companies that aren't banks to put out fires between paychecks. Cars get wrecked. Kids get hurt. Grocery shelves empty. The rent's due. Honest, smart, hardworking people can easily find themselves in a financial crunch. Under A--539, these folks easily become victims. Opportun has litigated against tens of thousands of minority families in LA County alone.

This bill deserves to go on the compost heap of bad ideas, and fast.

Patrick Rosenstiel is chairman of the Domestic Policy Caucus, a non-profit group devoted to free market solutions and consumer education.