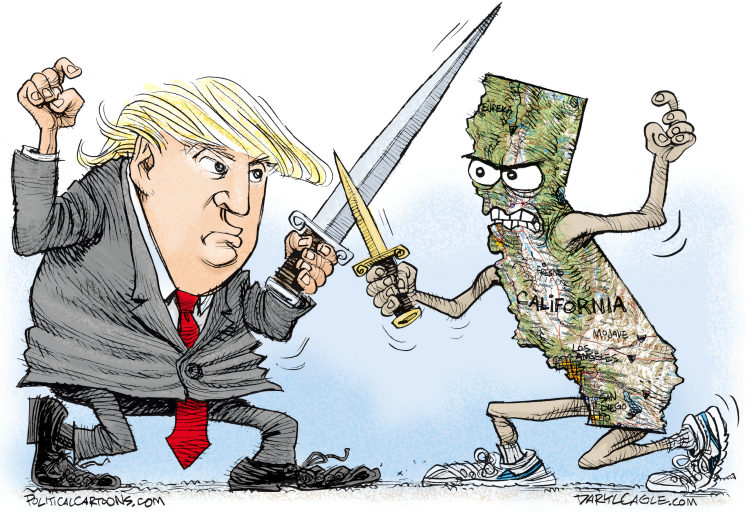 SAN FRANCISCO – Welcome to the Hotel California. You can check out any time you like but, to paraphrase the Eagles, your money can never leave.

The state has a problem faced by few others: What to do with roughly $13 billion in extra money.

Tax revenue here is running far ahead of projections and politicians on both sides of the aisle think it’s time to slice up the surplus pie. However, most Democrats see it as an opportunity to increase spending on social projects, while most Republicans advocate a more direct give-back, such as lowering the 12-cent per gallon gasoline tax.

Governor Jerry Brown, whose final budget before he leaves office was approved this month, is worried about rainy days. “This is a time to save for our future, not to make pricey promises we can’t keep,” Brown warned. “I said it before and I’ll say it again: Let’s not blow it now.”

Brown speaks from experience. Just seven years ago, as he began his third term, California was $27 billion in the red. Belt-tightening, increased taxes and a surge in the state’s economy has changed things dramatically.

Just six months ago, the governor was projecting a surplus of roughly $6 billion. Last month he revised the figure to nearly $9 billion. Now, Brown says his “Rainy Day Fund” will grow to its constitutional maximum of $13.8 billion within the next 12 months.

Why not just give the money back? It happened once, in 1986, when Republican Gov. George Deukmejian returned $1.1 billion to taxpayers.

But Brown and the Democrats, who control the legislature in Sacramento, believe these are volatile times, with financial collapse always looming.

The state’s most contentious money matter is its gasoline tax. Californians have the dubious distinction of using their cars more than most Americans, while also paying some of the nation’s highest prices at the pump. The gasoline tax revenue is used for badly needed road repairs – budgeted at $52 billion over the next decade.

A move is underway to get a gas tax repeal measure on the November ballot. Polls show that is one issue that could draw a significant number of Democrats over to the Republican position.

More than any other state, California has a boom-or-bust economy. The tech explosion in recent years has fueled the boom. But there are still grim reminders of the very recent past when school programs were slashed, food programs for the needy were cut, and the state’s highways fell into serious disrepair.

To Jerry Brown’s credit, his new budget does not contain the lavish spending increases that some of his more progressive supporters advocate. But it also avoids cuts and give-backs that would leave the state vulnerable. The state endured a $40 billion deficit in 2009 – a sum that dwarfs the current Rainy Day savings.