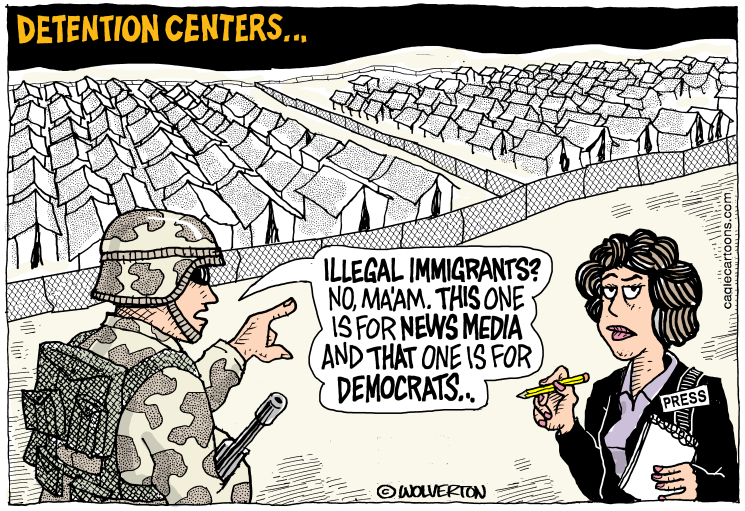 The little girl at the border with tears in her eyes. We saw her on front pages, on TV newscasts and on the cover of Time magazine.

It’s a powerful image – perhaps more responsible than anything else for forcing a change in the administration’s policy on separating kids from parents in immigration cases.

Yet, as we learned a few days later, this particular child was never separated from her mother. At the moment the photo was taken, the mother was being frisked by border agents, a fairly routine process that took roughly two minutes.

Does it matter? That’s a question prompting robust debate among journalists as well as fierce pushback from the White House.

The photographer, veteran John Moore of Getty Images, never suggested that the young Honduran girl was being separated from her parent. Moore called the photo “a straightforward and honest image” showing a “distressed little girl” whose mother was being searched.

However, the flood of emotion and outrage that swept across the nation was clearly not about searches. It was about separation. And Moore’s photo quickly became an icon in protests about the later.

The picture was used by a California couple who set up a fundraiser on Facebook. Over a half-million people have contributed, and the fund has exceeded $20 million.

The New York Daily News ran the photo as its entire front page. A tiny caption stated that the girl’s mother was being searched, but the clear implication was that this was a case of separation. Indeed, the paper’s accompanying headline spoke of “children ripped from parents at border.”

News photos play an important role in selling a story – and a point of view – because photos never lie. Or do they?

Consider the quickly-viral photo of President Trump and German Chancellor Angela Merkel, seemingly locked in a stare-down at the Group of Seven gathering. Mr. Trump tweeted that it was a neutral moment, but many editors used the image to accompany reports of a contentious meeting.

Perhaps editors felt the photo truly reflected both a moment in time as well as the bigger picture. But what about the girl at the border? Is it journalistically responsible to use an image to represent something that it clearly is not?

The administration and conservative commentators have pounced on John Moore’s photo to criticize media and promote the notion that if this photo was misleading then perhaps the entire immigration coverage is too.

That’s not the case. But editors and advocates did themselves no favor by allowing the image to illustrate a broad position rather than a specific fact.

Moore told the Washington Post: “I believe this image has raised awareness to the zero-tolerance policy of this administration.” He added that “this photograph for me is part of a much larger story.”

Perhaps. But ends-justify-the-means coverage is not good journalism.

The notion that a picture is worth a thousand words is of no use if those words must be devoted to clarifying what the picture is really about.