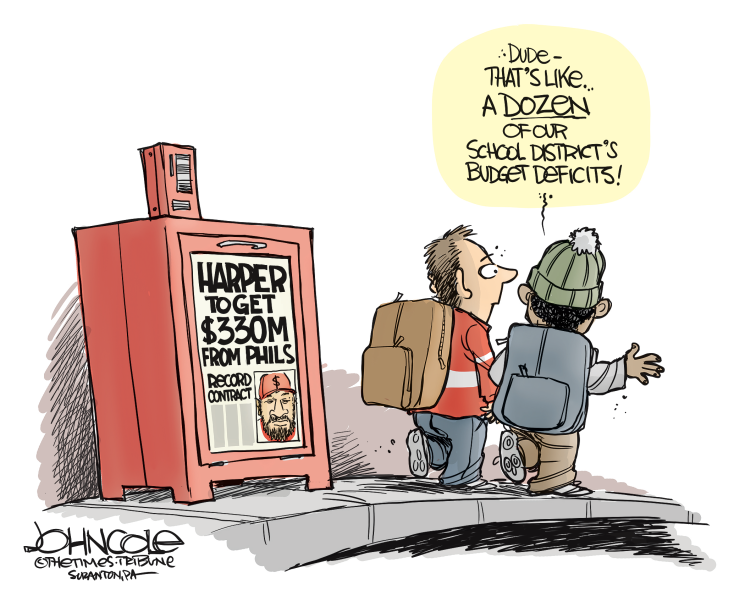 As a social experiment I once asked random people on the street what they would do if they won $10 million. One earnest woman said she would buy a new computer. A young man indicated he would pay off his student loan.

While I had been specific about “$10 million,” it soon became clear that what most people were able to process from my question was “a lot of money.” Moreover, they related the query to their own immediate needs. I imagine if I had asked the same question of a homeless person he might have said, “a warm blanket.” On the other hand, someone like, say, Jeff Bezos would presumably have a different perspective, maybe selecting a new satellite TV system for a favorite yacht.

Trout’s 12-year deal, the largest in professional sports history, eclipses the 13-year agreement signed just a few weeks ago between the Philadelphia Phillies and Bryce Harper for $330 million. And that topped a deal just eight days earlier in which the San Diego Padres gave Manny Machado $300 million for 10 years.

In these three players alone, baseball is investing over a billion dollars. As someone in politics once observed: “A billion here and a billion there, and pretty soon you’re talking about real money.”

Despite concern in recent years about declining attendance, baseball continues to thrust some of the most lucrative contracts in sports at its superstars. Some deals have proved to be real clunkers. In 2012, for instance, the Angels agreed to pay Albert Pujols $240 over 10 years, which will make him 42 years old when the contract runs out. Although Pujols is now primarily a designated hitter, still great but not nearly worth the paycheck he’s drawing, the Angels must pay him $28 million this season, $29 million next season, and $30 million in 2021.

Alex Rodriguez managed to get a 10-year deal worth $275 million from the New York Yankees. He retired in 2016 but the Yankees had to keep paying him, with the final $27 million delivered last year.

But the more significant issue in baseball economics isn’t what the sport lavishes on its superstars, it’s how stark the figures are in comparison to what is paid to thousands of minor-leaguers – and what Major League Baseball has been willing to do to preserve the disparity.

Last year an under-publicized measure called the “Save America’s Pastime Act,” became law, thanks to lobbying by MLB. It essentially made it legal for baseball clubs to deny players overtime pay, no matter how many hours they worked beyond 40 per week.

Obviously this legislation has no relevance whatsoever to Major Leaguers, whose minimum salary this season will be $555,000. But in the low minor leagues, where several thousand players labor, the pay checks are painfully small. Single-A pay, as noted, is $1,160 per month.

It is not lost on these players that despite some dips in attendance, Major League Baseball’s revenue has increased for 16 straight years, and last season topped $10 billion. And, apparently, it’s not lost on at least one team’s owners.

This month, as players worked out in spring training – for which non-rostered minor leaguers receive no pay at all – the Toronto Blue Jays announced that they are increasing salaries for minor leaguers, once the season begins, by 50 percent. The other 29 ML–clubs have been notably silent.

A vice president with the Blue Jays, Ben Cherington, was quoted in news reports as saying he hopes the action will help young players find better housing and food.

Other clubs should follow the Blue Jays’ lead. While it’s true that lower tier players are, in effect, “auditioning” for high paying jobs, there is no reason they should subsist on peanut butter sandwiches and sleep on borrowed couches.

I can’t imagine what Mike Trout plans to purchase with his $426 million. But I wouldn’t be surprised if the first thing one of baseball’s minor leaguers thought about was a sirloin steak.