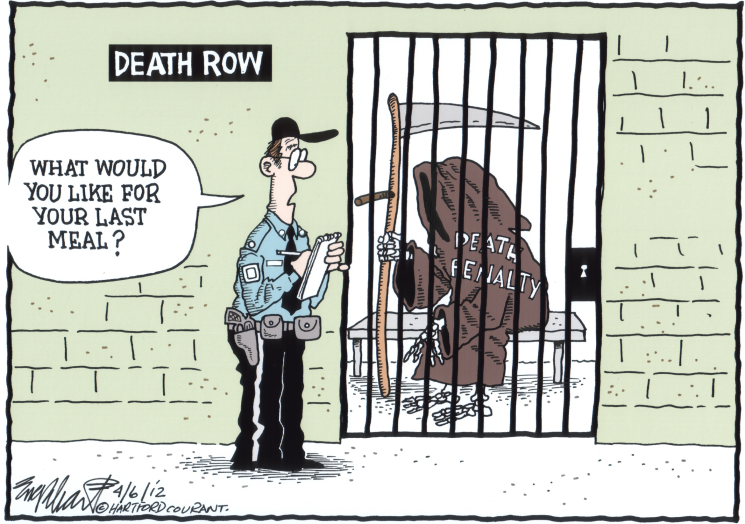 SAN FRANCISCO – Gov. Gavin Newsom has not only acted swiftly to save 737 souls on California’s death row, but he has also had the courage to call state-sponsored executions what they are: uncivilized.

“I do not believe that a civilized society can claim to be a leader in the world as long as its government continues to sanction the premeditated and discriminatory executions of its people,” the recently elected Democrat explained. He signed an executive order preventing executions while he is in office.

Too often, politicians take an easier path in confronting the death penalty issue. They dwell on the methods used in death chambers, or they fixate on the costs required to handle capital cases. These considerations, while valid, are cop outs.

As with many other controversial issues in America, California is at the center of the death penalty debate. Although overwhelmingly liberal in its state government, voters here nonetheless approved a measure in 2016 to streamline the appeals process for capital cases – in effect, a vote for the death penalty. It passed with 51 percent support.

Although California has not carried out an execution since 2006, its roster of 737 condemned inmates represents about 25 percent of the national total.

Newsom becomes the fourth sitting governor to issue a moratorium on the death penalty, joining chief executives in Oregon, Colorado and Pennsylvania. Twenty states have banned the practice entirely, with Washington joining that group last year.

Opponents of capital punishment, understandably, accept any rationale for halting the practice. But Newsom cuts to the heart of the matter when he says it is simply “inconsistent with our bedrock values.”

That is the only basis on which the United States will eventually join over 100 civilized nations in eliminating capital punishment. It does no good to seek more “humane methods” of killing, nor to speed up an already flawed appeals process, nor to find ways of reducing costs.

Most executions worldwide are carried out by Saudi Arabia, Iraq, Pakistan and Iran. Add to that the unpublicized state killings in China, North Korea and presumably in Russia, and you have a pretty good picture of the company America currently chooses to keep.

Predictably, President Trump tweeted a fast response to Newsom’s action, saying he was “not thrilled.” Trump appealed on behalf of “friends and families of the always forgotten victims” – as if executing people would do anything to bring their loved ones back. State-sponsored revenge is immoral.

Newsom’s action is likely to rekindle debate about the death penalty on the national stage. California presidential contender Sen. Kamala Harris opposes the death penalty but has faced tough questions about her handling of capital cases while state attorney general.

Every Democrat seeking the presidency in 2020 should speak out clearly regarding capital punishment. The 2016 party platform, pushed by Sen. Bernie Sanders, called it a “cruel and unusual form of punishment” that “has no place” in the nation. The eventual nominee, Hillary Clinton, supported its “limited use.”

The GOP platform that year stated, “The constitutionality of the death penalty is firmly settled.”

“The intentional killing of another person is wrong,” said Gavin Newsom while campaigning for governor. In signing his executive order he has underscored the fact that the issue is really no more complicated than that.