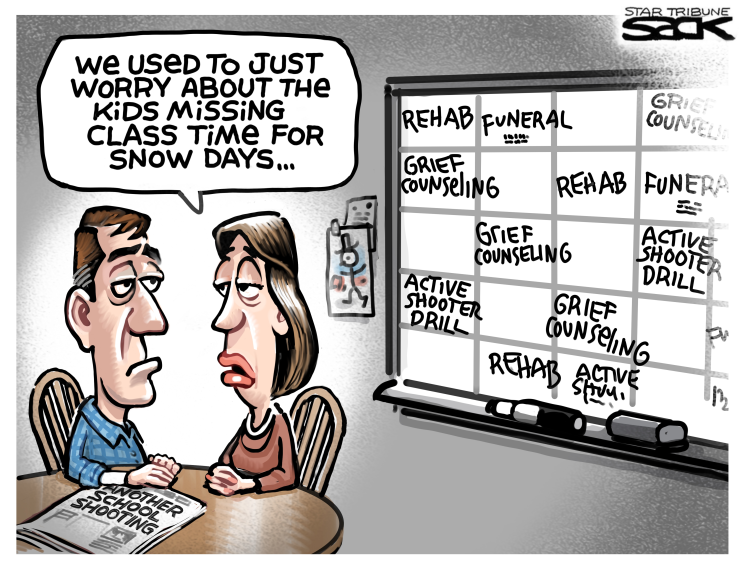 I read an essay the other day that caught me totally unprepared. It was written by a teacher in Charlotte, N.C., who stated that at a meeting about how to deal with an armed intruder, someone suggested giving teachers marbles to scatter in hallways to slow the gunman.

As it happened, the office building where I work in Central California had an "active shooter drill" the same day. It wasted 35 minutes and left us no safer than before. The best I can say is that, mercifully, no one was shot.

I'm prepared to say Americans have never been particularly skilled at preparedness of any kind. I first took note of this as an elementary school student during the Cold War, ordered to hide under my desk for air-raid drills. Did any of the adults behind this folly actually believe it would help us survive a nuclear attack?

Meanwhile, our school bus was delayed every few weeks by an evacuation drill. This involved having the two most muscular boys onboard - I was not one of them - rush to the emergency exit in back, jump to the ground, and then help all students, girls first, make their escape. We were never told exactly what sort of danger we were fleeing.

Like you, I've heard more airline safety briefings than I can count, and I have no faith whatsoever that passengers would respond properly "in the event of a water landing" - or, frankly, during any situation more serious than a spilled beer or a clogged toilet. And I have zero confidence in the preparedness of the folks in the exit row, who we all know did not "review the safety information card." They'd be no better prepared than the giggling varsity athletes assigned to help us off the school bus.

A few years ago the stadium in San Francisco where the Giants play began outlining the "evacuation" strategy before every game. The scoreboard showed a vague seating chart with colorful ribbons indicating exit paths. It might have made a good video game - "Escape from Bad Baseball" - but it left everyone I spoke with clueless about how to get out in a hurry.

It's impossible to avoid ads on late night radio that dwell on being prepared. For some reason insomniacs are the target audience for all sorts of products designed to help during Armageddon, perhaps because they're likely to be awake if it happens in the middle of the night.

Atop the list are 30-, 60- and 90-day supplies of dried food. There are also pitches for powerful flashlights, hand-cranked radios, waterproof blankets and, a personal favorite, 50-feet of super-strong rope. Then there's the vast section of preparedness marketing devoted to gold bars and silver coins. As I've heard several announcers warn, "In the event of a crisis, the banks will close and your cash will be worthless. Act now to protect yourself and your loved ones by investing in gold and silver."

I recently ran across an ad for the Stealth Angel company, offering a deluxe preparedness package for $489.99. This kit includes everything from a Survival Whistle to four servings of Savory Stroganoff. Best of all there's a "100% Satisfaction Guarantee" - although depending on the nature of the disaster, plus the banks closing and all, getting a refund might be of minimal value unless it was paid in precious metal.

Perhaps much of our faux preparedness is traumatizing folks, especially kids, more than it is actually preparing us for anything.

I'm reminded of a ditty by the singer-songwriter Tom Lehrer: "Be prepared! That's the boy scouts' marching song / Be prepared! As through life you march along." Seems like solid advice. However, Mr. Lehrer then adds: "Be prepared to hold your liquor pretty well / Don't write naughty words on walls if you can't spell." Also, don't throw marbles at a guy with a gun.