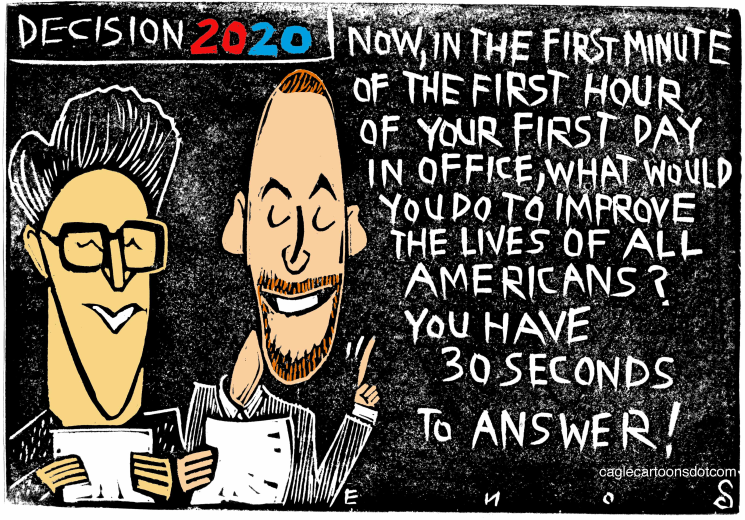 Among the losers in the Democrats' opening presidential debate was NBC News. Faced with an unmanageable number of candidates, an awkward format, and miscast moderators - not to mention serious technical glitches - the network took a difficult situation and made it worse.

Lester Holt, NBC's highest ranking journalist, was forced to split time in the opening hour with Savannah Guthrie and Jose Diaz-Balart. Then, after all three were replaced mid-debate by Rachel Maddow and Chuck Todd, Holt was relegated to standing in the audience for a few seconds to read from social media. It underscored how poorly NBC managed its talent roster as well as the folly of using viewer questions in a presidential debate - the first night from "John in New York," the second night from "Kathleen in Oregon."

NBC's most egregious unforced error was in failing to establish cohesiveness in the moderators' questions. For example, Guthrie's opening query to Elizabeth Warren concerned Warren's legislative agenda, but Guthrie's first question to Cory Booker was about, of all things, Sen. Warren's position on breaking up big corporations. With 10 candidates and limited time for each, cornering one candidate right out of the box with a question about his opponent was inappropriate.

At another point Wednesday the candidates were engaged in a lively exchange about gun rights. Yet, Maddow abruptly changed the subject to the Supreme Court, prompting Sen. Booker and Mayor Bill de Blasio to ignore her and address the gun issue anyway.

The moderators' failure to curb interruptions by de Blasio and a few others the first night predictably led to an even more undisciplined display on night two. Thursday's first half hour was so chaotic - Sen. Harris called it a "food fight" - that after 27 minutes social activist Marianne Williamson had still not uttered a word.

As in any debate, moderators needed a pre-game strategy for the style of questions: Would they be general ("How would you secure the border with Mexico?") or would they be pointedly aimed at the record of each candidate? For the most part, the questions were generic, yet after Rep. Tulsi Gabbard waited patiently for a chance to speak, Chuck Todd took an odd turn and asked her to defend a remark she once made concerning gay rights. Such scattershot questioning pushed the already-strained first night off the rails.

Similarly on Thursday candidates were asked a generic questions until, at the start of the second hour, Maddow pointedly asked Pete Buttigieg about his handling of the recent shooting of a black man by a white cop in South Bend, Indiana. A fair question? Yes, but only if all candidates were likewise put on the spot. Joe Biden, for example, wasn't asked by moderators about his recent comments concerning collaborating with segregationist colleagues in the Senate - it only came up when Sen. Harris confronted Biden about it.

In its self-promotional quest to represent its various news units - NBC News, MSNBC, The "Today" show, "Meet the Press" and Telemundo - NBC managed to leave one of its best players, Brian Williams, on the sidelines for pre- and post-debate analysis. Williams, a veteran who shines in this type of special coverage, was demoted four years ago after twisting facts his role in covering news stories. He currently anchors the 11 p.m. ET hour but no longer gets the big network assignments.

NBC's decision to crowd the moderators desk was driven by marketing and promotional considerations. Its five hosts were in an untenable situation, seeking to be fair but tough, and thorough yet brief, while herding 20 cats.

Taking stock after the second night, Ms. Maddow had an answer that was better than any of her questions. Moderating such an event was, she conceded, "not a thing that humans can do, and we should never do it again."

Are You Still Procrastinating About Your Tax Return?

by Danny Tyree
Misery loves company, but it's cold comfort that many of you ,' like me - still haven't filed your 2020 income tax returns. (And I'm aware others of you had already pre-spent your refund SIX MONTHS AGO, but come on, dude. When you announce, "I'm ...
Biden’s Not-So-Humane Immigration Policies

by Joe Guzzardi
Early Sunday morning, a commercial boat in the San Diego Bay called to report a distressed vessel near Point Loma. The vessel, maneuvering in seven-foot swells, fog and light rain, broke apart after hitting rocks.San Diego Lifeguard Lt. Rick Rom ...
Do the Charleston… If You Have the Grits

by Jase Graves
It's time for another installment of "Places you should go before you can't tell a presidential executive order document from one of your White House German Shepherd's training pads!" Yes, recently my wife and three teenage daughters took a week ...