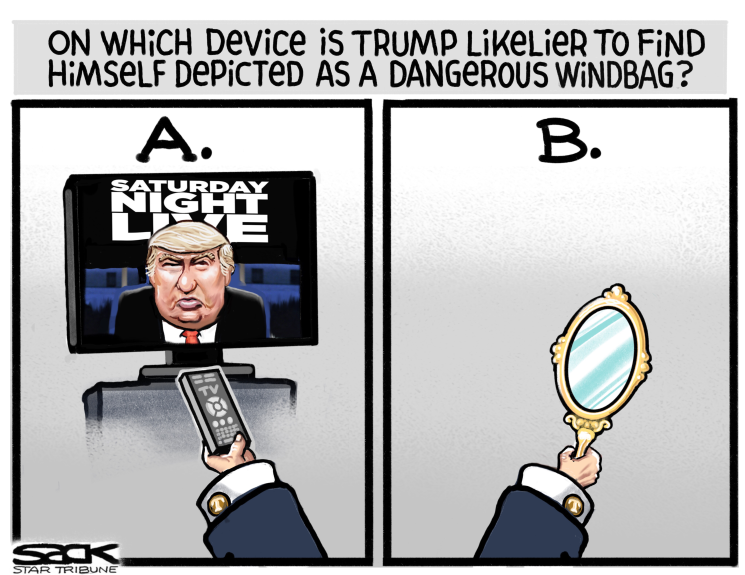 In its season opener “Saturday Night Live” did a fine job of skewering political figures who dominated headlines during the show’s summer hiatus. The Trump stuff was funny, but even with new Ukrainian fodder it was routine. The Democratic parodies, however, were fresh and so spot-on that they exposed the frustrating frailties of the 2020 field.

On the GOP side, Alec Baldwin was back as a conniving President Trump and Kate McKinnon nailed her clownish and publicity-thirsty Rudy Giuliani. But the most cutting political punches came in a skit titled “CNN Impeachment Town Hall,” with Democrats “handling the impeachment the only way they know how, with a muddled 10-person town hall debate.”

Sen. Bernie Sanders (Larry David) explained that he was “excited to be back and ruin things a second time.” Former Vice President Joe Biden (Woody Harrelson) said, “As I ask any time I walk into a room, ‘where am I and what the hell is going on here?'”

As television, it was hilarious. But for Democrats it should be alarming, right down to Erin Burnett’s sign-off: “And those are our choices, America. Good luck.”

With Trump and his cohorts digging themselves into what appears to be their deepest hole yet over matters involving Ukraine, Democrats should be cruising. Instead they have a clutch of flawed front-runners who seem strangely unsuited to the moment.

Bernie Sanders, who offered an exciting alternative to Hillary Clinton in 2016, now seems too much a parody of himself and too risky for voters who want stability in the White House without the drama. Elizabeth Warrensends vibes to some voters that remind them of Clinton – not because she’s a strong woman, but because she appears at times to be acting the part, angling to be someone she is not.

Joe Biden is a fine man whose best years are behind him. He’s a few flubs away from sending his supporters scurrying for someone else. Kamala Harris signals voters with her recurrent clarifications and policy revisions that she’s not ready for prime time. Pete Buttigieg strikes many, myself included, as the most articulate, thoughtful candidate in the field. But a 37-year-old mayor of a medium-sized city who happens to be gay is not the sure thing Democrats are looking for.

For months it seemed Biden was the answer. Yet, as Harrelson’s Biden clarified: “I’m like plastic straws. I’ve been around forever. I’ve always worked. And now you’re mad at me?”

Every politician has frailties that can be exploited in comedy. Even the beloved John F. Kennedy was lampooned by a comedian named Vaughn Meader, whose 1962 album “The First Family” mocked JFK’s New England accent and joked about his “rubber ducky.” It was funny but loving; it scratched the surface without exposing any deeper truths.

I imagine the scene in SNL’s writers’ room last week was not unlike that in the bunker where Trump strategists are holed up. With the current Democratic field, the skits – and the attack ads – seem to write themselves.

The next debate, on CNN October 15, will be a critical test. With as many as 12 candidates on stage it will probably be easier for the front-runners to stumble than it will be for lower-polling candidates to rise up. Yet, if Democrats are to find a viable candidate outside the top tier, time is running out.

Maybe it’s fortunate that “Saturday Night Live” will be on a brief break and won’t do a show immediately after the October debate. Funny as it might seem, the state of the Democratic field in 2020 is no laughing matter.