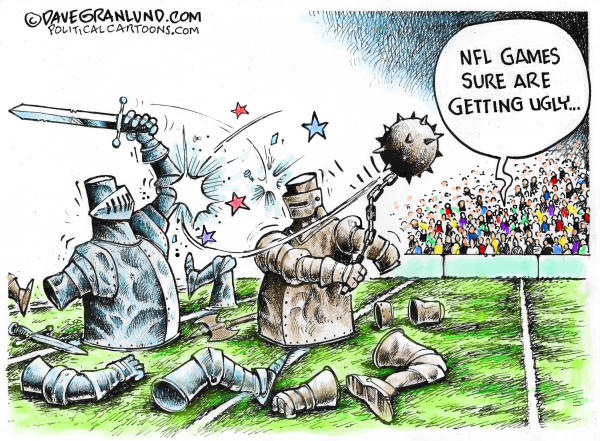 In the national obsession known as fantasy football, the most valuable position this season is not the quarterback or wide receiver, it’s the handcuff.

Handcuff is the term describing a player who isn’t good enough to see much action unless the guy ahead of him gets hurt. Just six weeks into the NFL season, the number of injuries among elite players is so high that fantasy team owners spend most of their energy rooting against, or as the case may be for, debilitating collisions.

Alexander Mattison of the Minnesota Vikings, for example, is hardly a household name and not likely to be hired for beer commercials. But he's among the NFL’s most valuable handcuffs. Sure enough, when the Vikings star running back Dalvin Cook injured his ankle after two games, Mattison became an immediate star.

I drafted Dalvin Cook for my fantasy team but wasn’t able to secure his handcuff, so I was stuck. I also selected Joe Mixon of the Cincinnati Bengals who, after a great first game, injured his ankle and hasn’t been the same since. Alas, I don’t have his handcuff, Samaje Perine, nor do I own the backup for George Kittle, star tight end on the San Francisco Forty-Niners. Kittle quickly hurt his calf and was placed on Injured Reserve.

As bad as my luck has been, it’s not even unusual. Despite improved training, better diets and computer-programmed workouts, NFL players seem increasingly like racehorses — fast, powerful, but fragile. The league keeps amending its rules to limit injuries, but to no avail.

Recently I took a chance and added a little-known player on the Kansas Chiefs just minutes before kickoff. If running back Clyde Edwards-Helaire were to get hurt, my handcuff, Darrel Williams, would be next up. Edwards-Helaire lasted only a few plays before suffering an MCL sprain. I’m embarrassed to admit I felt like a lottery winner as he was helped off the field.

Back at draft time, I selected a handcuff on the Baltimore Ravens named Gus Edwards, knowing that if anything were to happen to the team’s top running back, J.K. Dobbins, I’d be set. Immediately after my draft, Dobbins suffered a season-ending knee injury. Well! I was sorry to see a player hurt, but now Edwards was gold.

Days later, Gus Edwards tore his ACL and his season ended before it began.

I never thought fantasy football would require me to draft a handcuff for the handcuff.