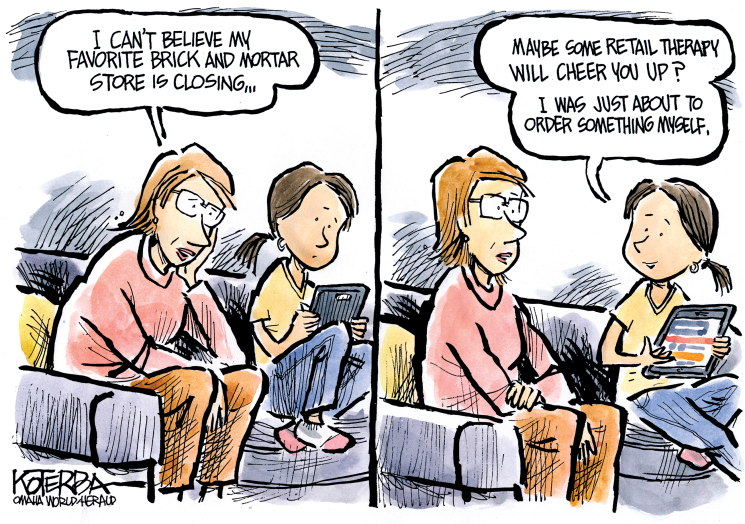 Bloomberg Businessweek just did a feature piece about the demise of Toys R US that, complete with an illustration of a crying Geoffrey the Giraffe, really tugs at your heart strong. It s a clever take that puts the blame squarely on private equity investors and executives who, the magazine claims, kept the company alive for a decade or more by living on borrowed money.

While that s true in part, there s much more to the story. Almost nowhere in its exposition of the company s failure does it examine the underlying problem: government policies that favor clicks over bricks by granting tax and regulatory preference to e-tailers over what s come to be known as main street retail.

As things currently stand, the sales tax on an item purchased over the Internet must be collected by the seller if the seller has a physical presence in the state in which the buyer resides. That Supreme Court decision is under review in a new case before the court. If the seller does not have a physical presence (the technical term is nexus) in a state, it is not required to collect sales tax on goods sold purchasers living out of state.

To many, this differentiation amounts to a loophole that results in preferential tax treatment being given to Internet retailers at the expense of local stores like Toys R US, which once dotted the American landscape. It was the toy store of choice for many parents until it became apparent the same items you could by in the store could be bought cheaper on the Internet and delivered to your house already gift wrapped.

It was sweet deal that cut into the ability of stores like Toys R US to survive. Some call that smart shopping by taking advantage of tax avoidance to lawful and legally reduces the amount of taxes paid. Actually, it s tax evasion, something that s against the law, because most states have an admittedly almost unenforceable provision on the books requiring voluntarily remittance of an amount equal to the tax they would have paid on a good purchased from another state free of sales tax if they had purchased it in their own state instead.

Admittedly, it s easier to understand in practice than it is to explain on paper, but it s had a major effect on American shopping habits. It s allow e-tail to grow at the expense of local retailers. Congress has tried to address this bias but has thus far failed – allow the government to in effect pick the winners and determine the losers, a group that now includes Toys R US.

Economist Art Laffer, one of the brilliant minds behind the tax policy that created the Reagan boom, has come up with one solution that s credible. He s no fan of taxes, but would prefer taking an e-commerce tax if the revenues are used to buy down the rates on taxes that are more economically inefficient, like the state income tax.

If Toys R Us is going to be held up as a cautionary tale, let s examine the whole story. It s easy, even fashionable to blame private equity, casting these investors like modern-day rapacious Gordon Geckos buying up companies to strip them of their assets, make a quick buck, and leave nothing but wreckage and unemployed workers behind. That s the Hollywood version of the story but it s not accurate. The people who owned and ran Toys R US lost $1.3 billion getting it wrong while being unable to overcome the growing power of e-tail built on government preference.

Congress must act to end the anti-main street regulatory environment. It should not be left to the courts which, perhaps without intending, created the mess we re currently in. It won t take much to level the playing field and ensure everyone is playing by the rules. Main Street brick and mortar can successfully compete with click-based e-commerce if the rules are fair. That way, everybody wins – especially the American consumer.