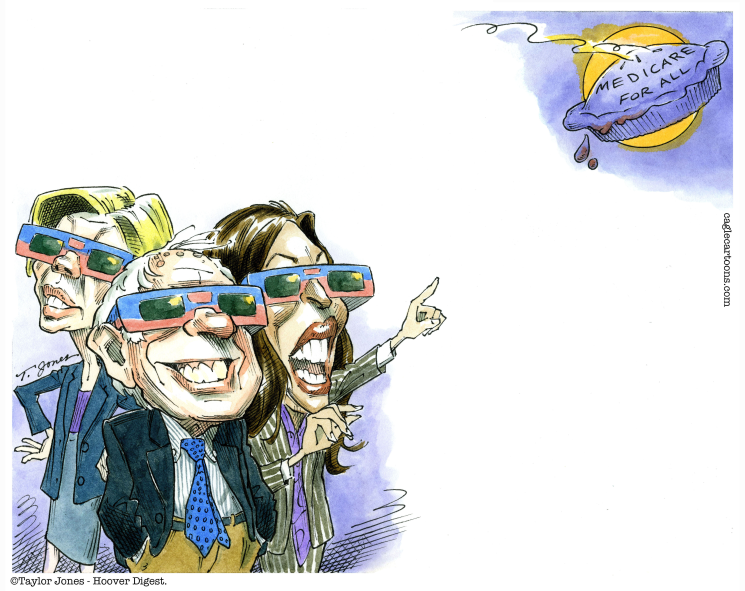 If you asked American seniors to tick off the things most important to them, the preservation of their independence and a secure retirement would be right up there with continued good health and occasional visits from their children and grandchildren. Unfortunately for them, the economics of healthcare make that a challenge too many of them are unprepared to meet.

The Democrats running for president touting "Medicare for All" as the one-size-fits-all solution to the ongoing healthcare crisis are making promises totally divorced from reality. As the National Academy of Social Insurance explains, the existing program providing health insurance for elderly "contains many gaps in coverage" of which most Americans are unaware "until they or a relative" are on it.

Something to fill the gap is needed. Some seniors rely on supplemental insurance to fill some of the holes but even with that and with the federal government's relatively new program to provide assistance in paying for prescription drugs, the out of pocket costs associated with staying alive and independent in one's twilight years represents an attack on retirement security.

Medicare doesn't cover the cost of routine dental care, eyeglasses, hearing aids, and most long-term services and supports. It also doesn't cover custodial care for people who are unable to live independently if they do not have an acute condition requiring skilled medical services. People with Alzheimer's, for example, living in nursing homes would not have their residential bills covered by Medicare even though it would pay in the event of a heart attack, stroke, or the onset of pneumonia according to NASI.

There are ways around this, ways that don't involve raising taxes on younger Americans, forcing seniors to make unnecessarily hard choices that ultimately threaten their independence, or having the U.S. government take over the entire healthcare system. One of them, a proposal by California Democrat Dr. Ami Bera and Missouri Republican Jason Smith, allows for the use of dollars in health savings accounts to fill the gaps in what Medicare will pay for.

What Bera and Smith are trying to do with the Health Savings for Seniors Act is a much-needed step toward re-empowering the elderly to exercise control over the realities of their healthcare.

One of the most useful features of an HSA is the lack of a "use it or lose it" requirement. Any funds unspent at the end of the year roll over in perpetuity until they are used, with all that implies as regards the magic of compound interest. It's a nifty way to compile a nest egg, something 46 percent of those polled recently by Luntz Global said they liked.

The Bera-Smith proposal, which is directed at seniors by expanding the list of approved items upon which they can spend HSA dollars without tax penalty, also incentivizes younger adults to save more aggressively for their future healthcare needs.

The aging of America presents new challenges for every generation. People are living longer and living healthier and yet, at the same time, facing diseases that are more destructive in an economic sense than what we've seen in the past. These new challenges require new approaches, ones that empower those of us who wish to plan for our own futures and guarantee our own security.

The Bera-Smith Health Savings for Seniors Act, because it expands HSA coverage to cover gaps in Medicare, is just the kind of thing the nation needs to help bring the cost of healthcare under control. This is an idea that has the strong support of hard-working Americans - 82 percent according to the Luntz Global poll - who want to improve our current healthcare system.

Congress should pass it and the president should sign it before the end of the year.