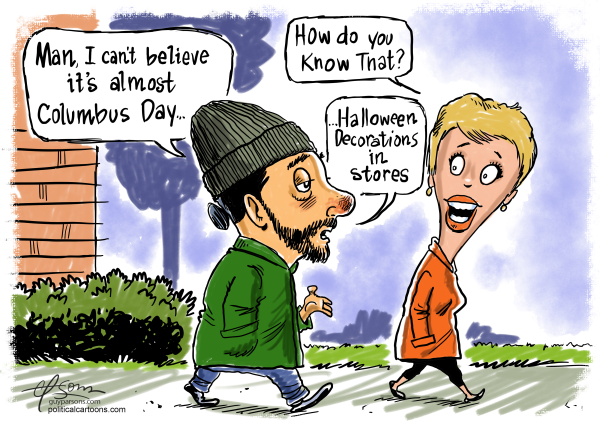 It’s Columbus Day again. Rather than denounce it as a celebration of western cultural appropriation and white male privilege, let’s make it an occasion to celebrate our diversity.

If you think about it, Columbus and his crew could be considered the first immigrants. As the first to make land in the western hemisphere (admittedly an arguable point) their adventure led to the founding of the United States, an occasion still worthy of attention no matter what the people behind the considerably problematic 1619 Project might say.

When you look at things on balance, America has done more to raise global living standards and promote the ideas of liberty and equality around the world than any other nation. Not without error, of course – and those errors should never be allowed to slip into the memory hole – but, as a nation and as a people, our character is shaped more by the good we have done than the evil we have allowed.

Some are reluctant to acknowledge this. In his 2021 Columbus Day proclamation, President Joe Biden chose to draw attention to what he called “the painful history of wrongs and atrocities that many European explorers inflicted on Tribal Nations and Indigenous communities” instead of celebrating the explorer’s accomplishments.

This divides rather than unites us. Those descended from people born here, from people brought here (most often against their will), and from people who came here looking for a better life than they could experience where they came from all have one thing in common: we are all Americans now. We should work together to improve our common lot rather than accelerate the decline of our American civilization. The demand for social and economic reparations for past injustices is intended to accomplish the latter. It's a clever, and unfortunately effective, strategy as George Orwell observed in "1984": "Who controls the past controls the future: who controls the present controls the past."

Those seeking to control the future, as Orwell put it, have singled out Columbus Day for special consideration, presenting it as an excuse to trigger a conversation about the need for social justice for the peaceful indigenous peoples massacred by white, empire-building Europeans. Shame on those who pretend that’s all America is.

Most people who came here from other lands did so because they wanted to. They saw the promise of America as a place where hope reigned, and opportunities abounded. Some had interests that were commercial while others came seeking religious liberty. Some were starting over, while others simply wanted a better life than they had. That continues to be the case today.

The dark blot stain on our national heritage caused by the practice of bringing some here without their consent, treated as property rather than people, remains – alongside a bright red stain created by the blood spilled by so many, native-born and immigrant, in the name of ending that practice here and around the world.

We are a nation of immigrants. Those born elsewhere have for centuries helped create the freest, most prosperous, generous country mankind has ever known. Seeking their share of the American Dream, immigrants have contributed mightily to our common success. The Kaufmann Foundation estimates that in the first decades of the current century, every month almost 350 out of every 100,000 immigrants created a new business. That’s an impressive record.

America should welcome immigrants with open arms, applauding their courage. Who among us would leave behind everything we knew for life in another country? Only the bravest among us. Honor these 21st-century adventurers and those who came before them on Columbus Day.

The country we are today was not stolen from others. It is the result of centuries of hard work, initiative, and innovation undertaken by people who often could not find the opportunity to do well where they came from. So, they came here.

Can there be a greater compliment to who we are and what we represent than that? by Elwood Watson
Donald Trump endured bipartisan criticism for his recent dinner with Kanye West and Nick Fuentes, a white nationalist and far-right wing advocate. Critics from across the political spectrum — including some reluctant Republicans — called out ...
Tech workers brace for possible job killer by Joe Guzzardi
Like the proverbial bad penny that keeps reappearing, lousy immigration bills are hard to kill off. Consider the EAGLE Act of 2022, also known as Equal Access to Green Cards for Legal Employment, or formally recognized as H.R. 3648. The newest p ...
Have you hugged a Santa impersonator lately? by Danny Tyree
It has been years since my family last dealt with the “pictures with Santa” pageantry, but Saint Nick impersonators remain an integral part of Christmas for Americans. Parents feel compelled to honor the tradition of dumping tiny tots in Sa ...