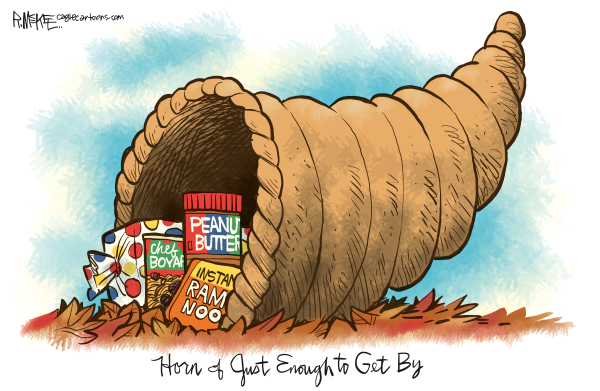 This week, people from all walks of life - from the many different faiths, races, and ethnicities who inhabit this wonderful place we call America - will gather together and give thanks, grateful for the blessings they’ve received over the last twelve months.

In previous years, they might have given thanks for health, for family, for children, for grandchildren, for employment, and for that special hope or dream that was unexpectedly realized. This year, in 2022, they’ll no doubt also be giving thanks the turkey dinner with all the trimmings they’re about to enjoy didn’t break the bank.

Like everything else, Tom Turkey’s risen in price, up by a record high 20% over last year, according to the folks that feed the nation and the world over at the American Farm Bureau. The average meal for ten, the Farm Bureau says, will cost about $64, which may not seem like a lot to some people but, as just under $6.50 a person, is considerably more than people are used to paying.

That pumpkin pie on the table? Inflation’s eating into it faster than Uncle Ed will when he raids the refrigerator after everyone else has gone to sleep. Never before in the group’s 37-year history of tracking the price of what is usually found on the Thanksgiving table have prices risen so quickly in so short a time.

Who’s to blame? The Farm Bureau says it’s the continuing increase in inflation month over month of between 7 and 9% and the 12% hike on the most recent Consumer Price Index numbers regarding food consumed at home.

“Farmers are working hard to meet growing demands for food — both here in the U.S. and globally — while facing rising prices for fuel, fertilizer, and other inputs,” said Farm Bureau Chief Economist Roger Cryan said – and we should all be thankful they are. They’re not responsible for the rise in prices.

Neither are the truckers who bring the turkeys and boxes of stuffing and loaves of bread and sweet potatoes and the bags of those tiny marshmallows, without which no Thanksgiving table is complete. Or the hardworking people who stock the shelves and ring up your purchases in the checkout line while wishing you a “Happy Holiday!”

The hike in prices also isn’t the fault of the people who own and manage the stores that sell us the dinner fixings or run the distribution centers and the freight companies that move products from one place to another.

No, the ones responsible for making your Thanksgiving dinner the most expensive ever are the turkeys in Washington who keep spending your money like it was their own. Inflation is caused by too much money chasing too few goods and services. Higher demands fuel higher prices.

How did all that money get into circulation? The Fed printed it so Congress could spend it on the American Rescue Plan and other so-called relief programs that paid people not to work and producers not to produce from what was left over after the scammers and rip-off artists got who knows how many tens or hundreds of millions of your hard-earned tax dollars.

Then there’s the effort to eliminate oil and natural gas from the receipt for American energy that’s raised the cost of everything from the industrial processes required to produce the food items we expect to enjoy to the price of the diesel fuel consumed to bring it to your local grocers – if it’s available.

The Washington crowd doesn’t want you to put all the pieces together. Policymakers would prefer you focus on the ceremonial presidential pardon of the Christmas turkeys so they can continue to blame greedy businessmen for the fact you had to pinch pennies on your holiday meal while they dined like the Middle Eastern potentates of old.

Don’t be fooled. The cost of the food on your table this year and every year at the end of November has everything to do with how you voted earlier in the month. It may seem crass to some to point this out at a time when we’re supposed to feel thankful that will live in a country where expressions like these are allowed. But it’s important to think about the role policy made in Washington has on the aspects of everyday life. Some people call it “pocketbook economics.” Others call it just plain old common sense. In either case, it's important to keep at least in the back of your mind how the policies made by the politicians ostensibly in your best interests work against you.

Hopefully, it will different next year, when you gather around the same table to give thanks for your blessings once again – that is if higher rents and rising interest rates haven’t forced you to move to a new place by then.