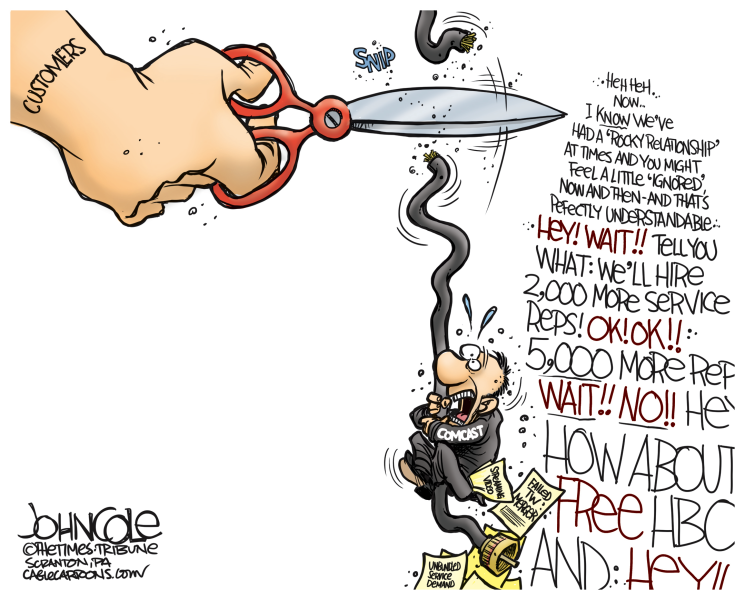 If you "cut the cord" and switch from cable TV to streaming services, you will probably notice a big difference in price, thanks to that long section of your bill with taxes and fees either being gone completely or dramatically slimmed down.

As more customers go in the direction of cord cutting competition intensifies on the incumbent franchised cable companies, viewers are justifiably calling foul on the often outrageous demands local governments place on them that result in more taxes and fees on their bill.

To begin with, there is the maximum 5 percent franchise fee that localities are allowed to charge on cable service under the federal Cable Act. That places cable at a disadvantage versus its video competitors, but it's authorized by law. That 5 percent fee alone delivers over $3 billion a year to local governments.

Unsatisfied with that haul, local governments have begun concocting a wide variety of additional taxes, fees, and mandates that go on top of and violate the 5 percent federal cap.

The Federal Communications Commission (FCC) is considering a rule that would close these loopholes and clarify that the 5 percent cap applies to all of the various and sundry cable-related exactions creative local governments have come up with, and would prohibit fees on broadband and other non-cable services as a condition of a cable franchise.

It is a good and necessary proposal and should be made final, before the most abusive local practices spread even further.

An appendix to the cable industry filing with the FCC shows how far things have gone already, including a number of Ohio ordinances requiring a "certificate of registration" with expensive regulatory requirements before a cable operator can offer non-cable services; a requirement in Corvalis, Oregon that requires a special franchise for Wi-Fi deployment; new additional fees for access to public rights-of-way in North Carolina, Kentucky, and New York City; and lengthy lists of communities all over the country demanding free government channels and free cable and Internet service at parks, libraries, government buildings, etc.

Many of these concessions may sound desirable, but they are costs that are ultimately borne by cable customers. To the extent free services are desired, they can be demanded but must be counted towards the five percent cap, as the FCC has proposed and the Cable Act requires.

Then there are the taxes.Eugene, Oregon is charging a 7 percent fee on broadband revenues in addition to their existing franchise fee on cable.And after the state Supreme Court ruled in favor of Eugene, some other cities across the state have followed suit with similar fees.Similarly, Los Angeles, California is charging its 5 percent "possessory interest" tax on broadband and phone service.In Texas, cable companies are being charged for right-of-way access twice - once for cable and once for phone - even though their services share a single wire.These taxes/fees violate federal policy against local internet taxes and will only discourage the deployment of faster and farther-reaching broadband.

The FCC under Trump's appointees has been aggressive in lowering costs and encouraging deployment of broadband by wireline and wireless phone companies by reversing heavy-handed Obama-era broadband regulations, streamlining pole access regulations and fees, and allowing retirement of legacy networks and services.All of that is great news for consumers, and Internet speeds have risen to record highs.

But if the FCC is not now equally aggressive in limiting local government franchise abuses, then cable - which is investing heavily in multi-gigabit speeds, the next giant leap in broadband capabilities - will be unfairly disadvantaged.

And consumers will have an even longer, more obnoxious list of government taxes and fees on their cable bills.