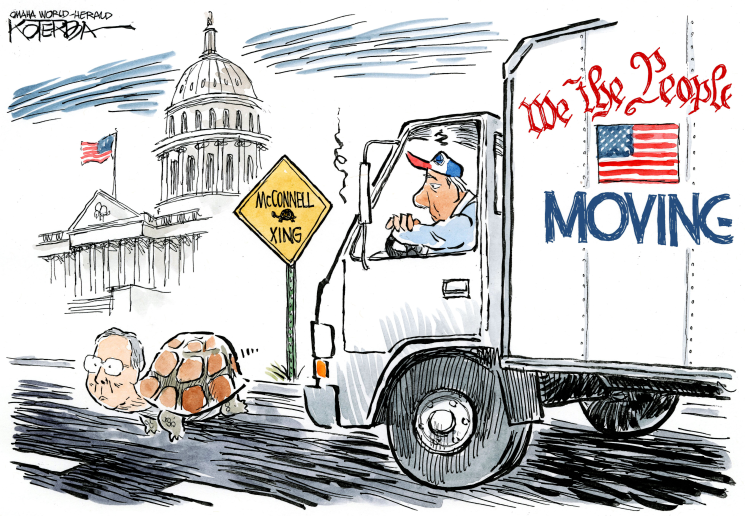 There's something about the sound of an empty house.

You walk room to room and your footsteps seem to echo as you take inventory of each vacant space.

I did it again, just last week.

I counted and it was the fourteenth move of my adult life. That's a lot.

Because we are in the midst of the busiest moving season of the calendar year, I thought it appropriate to raise some universal truths about moving, not the least of which is that everyone hates it.

I have yet to speak to anyone who has recently gone through a move and said, "You know, that was really fun. I hope to do it again soon."

Moving is always a grueling emotional and physical exercise. And something always goes wrong, usually several things but always at least one thing.

It started early this time. I had rented a small trailer to haul all of my worldly belongs. When I went get the trailer, the manager tested the lights after he hooked it to my vehicle.

"Left turn signal!" he shouted, as I flicked levers and pushed buttons.

The hazard lights on the trailer weren't working for some reason.

"Come back into the office and we'll redo your contract."

For a second, that sounded kind of intriguing. I thought that maybe I was getting a raise or something. As it turned out, my new contract was the same information on a different piece of paper because I needed another trailer.

The office was packed with other do-it-yourselfers renting trailers and vans. It has always struck me as odd that any schmo - and I'm including myself - can walk into one of these rental places, show a driver's license, a drive away in a 26-foot truck. Shouldn't there be some kind of competency test or something?

As an aside, I am blessed to be able to afford to hire movers. I simply choose not to. I come by this tendency naturally.

For example, my father refused to pay for parking, not because he couldn't afford it but because he didn't believe that parking should be a monetary transaction. My old man would walk seven miles in a hurricane before he'd pay five bucks to park.

Thus, as long as I'm able to carry stuff without really hurting myself, I'll go it alone.

But faulty hazard lights are small potatoes compared to some of my past moving complications.

Once, the day before a move, my car was stolen from in front of my house.

Another time, a friend of mine and I were moving a dresser up a winding staircase when it got stuck between the second and third floors.

I was helping that same friend move out of his apartment a few months later and we were moving an enormous, marble tabletop down the stairs. Since it was round and, after all, like a wheel, we thought we would just kind of roll it down the steps. Of course, this approach ignored the laws of physics and once that massive, marble top collected some momentum, there was no stopping it from rolling right through the wall.

One time, a couple of days before a move, my neck went out.I was working in TV news at the time and a colleague and I were driving to a story when I suddenly couldn't turn my head.

The colleague with whom I was riding that day is a gifted videographer and friend I've known for 30 years. I've since helped Brad with a move and he showed up to move me out of my house a few days ago. We pay each other in cheesesteaks.

As self-appointed foreman of this most recent operation, Brad had license to comment on some of the items he found boxed and bagged for transport.

A package of ramen noodles, for example. Several boxes of tea that belonged to my daughter, who recently moved to Colorado.

And a catcher's mitt.

"Why in the world do you need a catcher's mitt?"