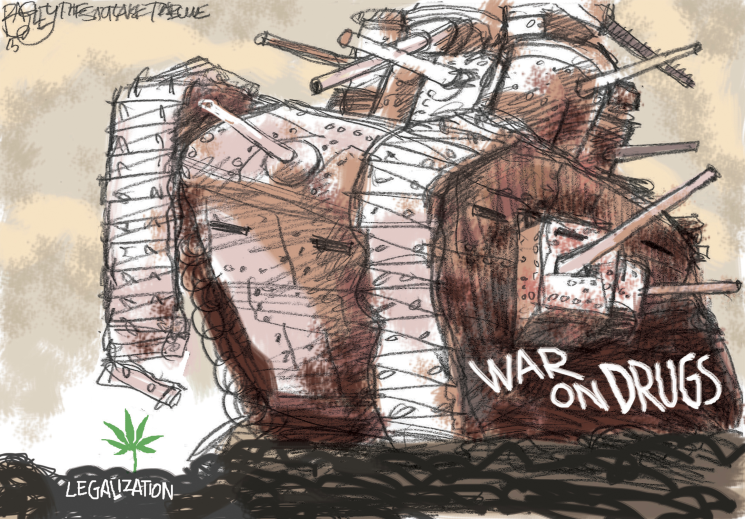 What’s the correlation between hallucinogens and a proposed pay raise for members of Congress? I think we all know the answer to that, but let’s review.

Rep. Alexandria Ocasio-Cortez (D-N.Y.) wants to spend taxpayer money to make it easier for researchers to study the benefits of psychedelic drugs, including magic mushrooms, peyote and anything else that could potentially have therapeutic value.

It’s not the worst idea I’ve heard, though that bar is pretty low, or high, as the case may be.

To be sure, there are valid reasons to explore the use of what the government labels “Schedule I” drugs – including marijuana – in the treatment of PTSD, chronic pain and end of life care. Of course, as soon as illegal substances are deemed legal for therapeutic purposes, it’s only a matter of time until the push to make them legal for recreational use. In fact, it has already happened. Oakland and Denver recently decriminalized the use of psychedelic mushrooms. Recreational use of marijuana is now legal in 11 states.

For those not familiar with the side effects of hallucinogenic shrooms – the only mushrooms I use are in pasta sauce – we might want to pause before moving forward any further.

In a May 10 opinion piece in The New York Times, Michael Pollan, who has written books on the uses of psychedelic drugs as is largely a proponent, issues a warning.

“Someone on a high dose of psilocybin (mushrooms) is apt to have badly impaired judgment and, unsupervised, can do something reckless.”

Getting into an automobile comes to mind.

Politics are also at play here. Surprise. Legalization plays well on the left and there is a fairly sizable constituency out there that really doesn’t care very much about the therapeutic use of psychedelic drugs and will support any candidate who makes it easier for those so inclined to get loaded.

But we can debate the moral and practical implications of further anesthetizing our population some other time.

For now, I’ll do you one better.

Let’s start the research immediately, in Congress, with the compulsory serving of a course of magic mushrooms at the opening of each session.

We’ve already tried this sober.How much worse can stoned be?

Perhaps some mind-altering fungi would mellow everyone out. Maybe the next time one of our lawmakers – pick one, on either side – starts shrieking about some hot-button issue – pick one – some lightly toasted legislator in opposition will defuse the angry discourse.

“Dude. Relax. Have a mushroom. Just enjoy the pretty colors.”

Think about it. Mitch McConnell shows up for work wearing a tie-die shirt and a headband. Nancy Pelosi is playing the sitar. Groovy.

You could make the argument that Ocasio-Cortez has already visited a shroom shop or two based on her recent proposal to raise pay for members of Congress.

House Democrats, realizing that any inkling they are even considering giving themselves a raise will be as popular as poison ivy, tabled the issue pending further discussion.

Say what you want about Ocasio-Cortez but she’s not short on ideas. Sure, her ideas are mostly awful but at least she’s trying.

As long as we’re talking about ideas that have gone nowhere, about a year ago, Rep. Clay Higgins (R-La.) proposed a resolution that would allow for random drug testing for members of Congress. Another less-than-terrible idea.

“I have observed some behavior that would cause one to wonder,”, Higgins told USA Today.

It would be perversely comforting to dismiss political dysfunction in Washington as simply a matter of spiked brownies in the break room, or if the Senate Judiciary Committee meeting room looked like a scene from “Up in Smoke.”

However, we have to face the reality that our lawmakers have been at their tea-totaling, clear-headed, stone-cold sober best while bringing us to this state of government inertia.

I’m not sure what to say about that other than pass the mushrooms.