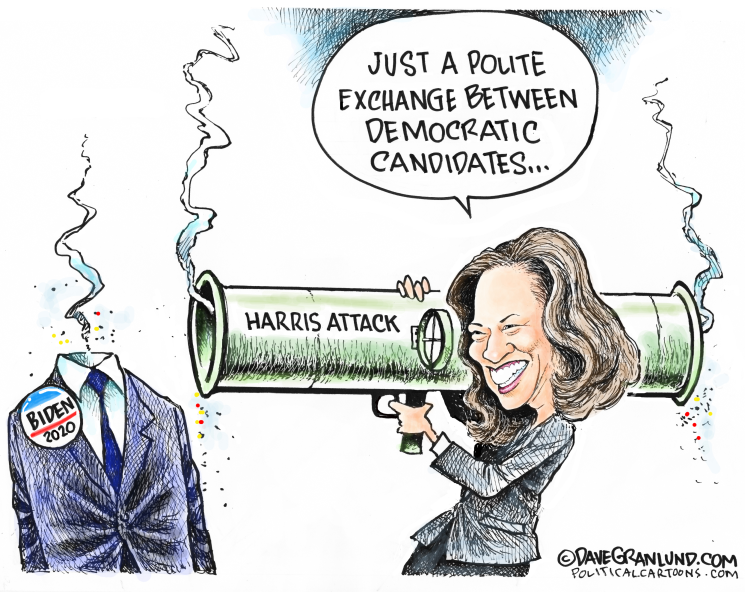 I don't know Joe Biden personally. I do know a lot of people who move in the same circles as the former vice president and by all accounts, Biden is a decent person; genuine, affable, earnest.

I disagree with Biden on most political issues and I wouldn't vote for him at gunpoint,but I don't believe he is a lech, a racist or a homophobe.

Yes, he does have a gaffe habit that is killing is presidential candidacy, one misspoken phrase at a time, but he deserves better from his own party and from a media that have decided he's no longer a horse worth backing.

Biden is the closest thing that passes for a moderate among a phalanx of Democrats who want to turn the U.S. into Sweden, Finland, Cuba or any place where the words "personal liberty" are about as elusive as the Loch Ness monster.

At Pride fundraiser last weekend, Biden was trying to tout progress on gay rights when he said how, just five years ago, "it was acceptable to make fun of a gay waiter."

And then in a Rainbow PUSH Coalition event Biden, talking about race relations, said, "That kid wearing a hoodie may very well be the next poet laureate and not a gangbanger."

Awkward? Yes. Unartful? Absolutely. I'll even give you cringeworthy. There are times when watching Biden in a public forum is like watching a stand-up comedian bomb on stage. You might not like the act but you can't help but feel compassion for the guy. He's dying up there!

Of course, compassion is rationed with an eye-dropper in politics. Biden's opponents in the presidential race, who knew full well what the former vice president was trying to say, quickly pounced on his comments.

During last week's televised debate, California Sen. Kamala Harris said to Biden, who has also been chastised for his past position against busing desegregation when he served in the Senate in the 1970s, "It was hurtful to hear you talk about the reputations of two United States senators who built their reputations and career on the segregation of race in this country."

Harris also reminded Biden that she had been bused to school as part of an integration program.

About the hoodie comment, New Jersey Sen. Cory Booker told NBC's "Meet the Press," that Biden "is causing a lot of frustration and even pain with his words."

The "let's-get-Joe-out-of-the-way" strategy seems to be working.

As of July 1, Biden's lead against the Democrats' cast of thousands had shrunk to only five points. We know what polls are worth 16 months before an election and a lot of this is just plain old political eye-gouging.

But I think it also reveals a broader issue.

If you don't agree that Biden is a moderate because there is no such being among Democrats, I can't come up with much of a defense. However, among the rest of the Democratic presidential candidates in the 2020 field, Biden is the outlier.

He served in the Senate in another era, when bipartisanship still existed and civility, even in politics, was more than some ethereal notion.

Biden's opponents, who want to take the country farther to the left than it has ever been, realize that his moderate tendencies make him more electable. He is a threat. Therefore, he must be silenced, marginalized, and eventually destroyed.

Yes, Biden is often his own worst enemy. His history of gaffes goes back four decades. Just do a Google search and you'll find several highlight reels of Biden's best, or worst, "foot-in-mouth" and malaprop moments.

Remember this classic from 2006?

"You cannot go to a 7-Eleven or a Dunkin' Donuts unless you have a slight Indian accent. I'm not joking."

Like I said, cringeworthy. But mean-spirited or destructive? No, nor do such comments reflect how he might lead the country.

But there's no room in today's Democratic party for a moderate. Biden shouldn't feel bad about that. There'd be no room today for J.F.K. or Harry Truman either.

Democrats like to call this "progress." But whether you like Biden or not, destroying someone who has spent 45 years in public service doesn't seem very progressive.