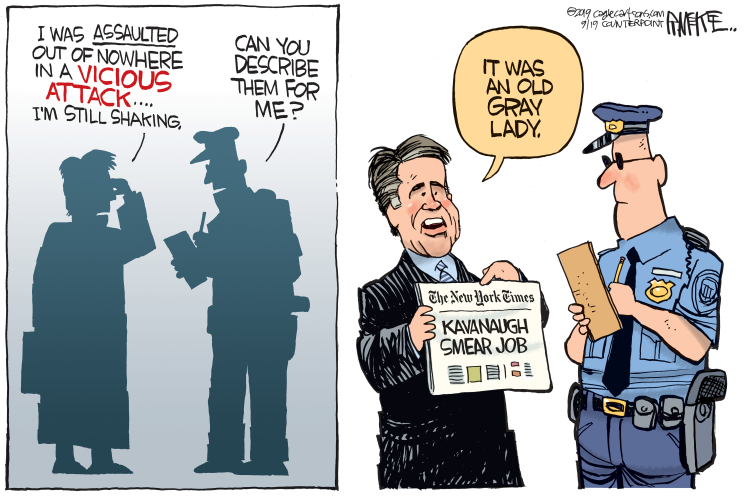 Never let the facts get in the way of a good vendetta. Words to live by for politicians and apparently for some news organizations.

A New York Times story has reminded Democrats that they still hate Brett Kavanaugh and haven't come to terms with the fact that he now sits on the Supreme Court.

Sunday, The Times ran a story describing an incident of sexual misconduct by Kavanaugh when he was in college. The alleged victim never spoke to reporters and told friends she didn't recall the incident. This rather important tidbit of information never made its way into the original Times story.

"I believe Christine Blasey Ford. I believe Deborah Ramirez," Pressley said "It is our responsibility to collectively affirm the dignity and humanity of survivors."

In other words, we're going to use this most recent, uncorroborated allegation as an opportunity to relitigate Kavanaugh's past, which has already been investigated by the FBI and aired publicly during Kavanaugh's confirmation hearing.

Not all Democrats agree this a battle worth fighting, and those who insist on fighting it are well aware that it will lead nowhere.

In this history of the United States, only one Supreme Court justice has been impeached - Samuel Chase, 200 years ago, and he was never removed from office.

If they know pursing the impeachment of Kavanaugh is mostly a waste of time, why do the Democrats persist? Perhaps they're trying to weaken Kavanaugh, undermine him and impact his decisions on the court. I wrote in October that the Democrats' visceral loathing of Kavanaugh is rooted in his anti-abortion position. Perhaps this is a warning to future conservative nominees - "You might get confirmed but we'll keep coming after you."

But let's not forget something - Democrats are merely reacting to a story that should never have seen daylight.

We have to ask ourselves, as consumers of media, how a story with such a glaring omission gets published in the first place? It's hard to believe this was an accident or oversight. The piece went through multiple editors.

It's difficult to come to any other conclusion.

I'm inclined to call The Times story journalistic malpractice. But malpractice suggests carelessness, laziness or negligence. And the reporters who wrote the story claim there was nothing deliberate about the omission, even though the Times' editors didn't issue their correction until they were called out.

That leaves only one other possibility - the "paper of record" in the U.S. has determined that if it dislikes someone enough, objectivity no longer matters or worse, isn't even considered.

I used to love to read The Times, the Washington Post and my home paper, the Philadelphia Inquirer. I not only learned about the world by reading these papers but I learned about journalism.There I was, a 12-year-old, sitting at the breakfast table, my face hidden behind the Inquirer business section.

The original Times story would have never been published 30 years ago. The rules were different then. As a reader, you could assume a certain degree of neutrality and you could be reasonably confident you were getting information that wasn't tinted, one way or the other.

I'm alarmed by the number of college students who don't know the difference between opinion and news. It's not their fault. They're consuming an amalgam of the two - and it's being called "reporting."

Walter Cronkite once said, "Objective journalism and an opinion column are about as similar as the Bible and Playboy magazine."

Cronkite said that many years ago, when the boundaries between news and opinion were more clearly defined and respected.

But now that those lines have been purposely blurred, we are witnessing the forging of a most unholy alliance.

Manchin’s Sin? He Has a Mind of His Own. by Christine Flowers
I find it interesting that Democrats are ganging up on Joe Manchin. It’s not exactly surprising, since the West Virginia senator hasn’t been a team player for a while, despite the fact that he is not now and never will be a Republican. But h ...
‘America is Back’ — But to What? by John L. Micek
As a Democrat from a staunchly Republican state, Sen. Joe Manchin of West Virginia is a vanishing breed, not only in contemporary American politics, but in a Democratic Party that is steadily tacking to the left. The senator from the Mountain St ...