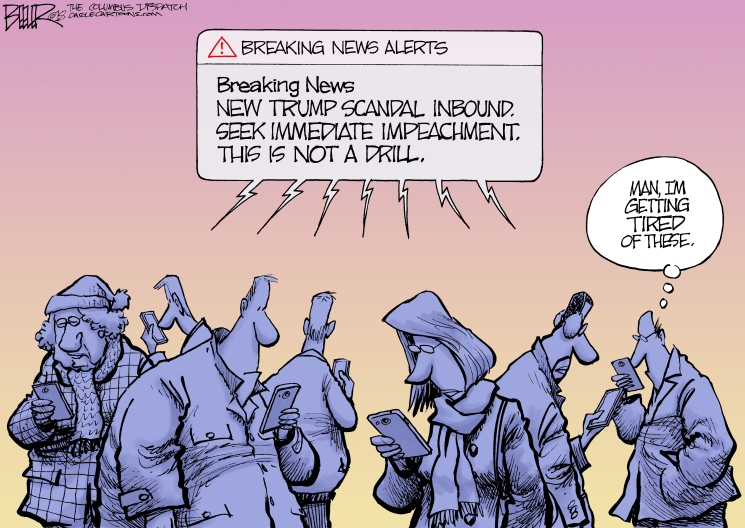 Sure, I could write about impeachment again this week, and probably for countless weeks to come. But I think we all could use a diversion, what with the 24/7 news coverage, analysis, and editorializing that passes for news coverage. It makes you wonder if the earth is still turning on its axis.

So, I thought it a public service to highlight some news stories you might have missed because they were barely covered or buried somewhere within the depths of your favorite online news outlet. Here they are, in no particular order:

– The Nobel Prize for medicine was awarded to three men who have spent years studying oxygen, specifically how “cells sense and adapt to oxygen availability.” The research could lead to new strategies in fighting cancer and other diseases. If you’re looking for further explanation, I’ve gone about as far as my “C+” in chemistry will take me.

– Scientists claim they’ve seen pigs using tools to dig. The pigs were observed in a French zoo using sticks. I watched a video on YouTube and was unimpressed. It looks to me like the pig is just moving the stick around with his snout. When a pig walks into a cafe Copyrightand orders a croissant, I’ll pay attention.

– President Trump’s new bestest buddy, Kanye West, is stumping for the president. West, a Trump supporter, told a crowd Sunday that political loyalties and decisions based on race are “mental slavery.” He went on. “And we got the right, right? We got a right to our opinions, right?” Not according to some of the emails I receive.

– Russian President Vladimir Putin turned 67 (I forgot to send a card). Putin did what most of us do on our birthday – he posed for a bunch of weird photos in the Siberian mountains. In a surprising turn of events, he kept his shirt on.

– Miley Cyrus says she can date other people. The singer split from her husband, actor Liam Hemsworth, in August. She now says she’s “all grown up” and can do what she wants. What do I know but it seems as if “doing what she wants” hasn’t been an issue for Cyrus, before or since she became an adult.

– A truck carrying 38,000 pounds of frozen bagels caught on fire in Indiana Sunday. No one was injured but the bagels were burned beyond recognition.

– Acting Homeland Security Secretary Kevin McAleenan showed up to speak at Georgetown Law School Monday, but was shouted down by protesters who take issue with the Trump administration’s immigration policies. McAleenan walked of stage before he got started. So much for constructive discourse.

– Democratic presidential candidate Kamala Harris detailed her plan to give workers up to six months of paid family and medical leave – twice the length of time included in any family leave bill to date and way more generous than any other proposal by a presidential candidate. No word on what it will cost. Who’s going to pay for it? If your answer is “other people,” well done.

– I’ve said it before and I’ll say it again, most of Alexandria Ocasio-Cortez’s ideas are terrible, but she is prolific. The New York Democrat unsheathed another gem this week ,’ abolishing prisons in the U.S. “We need to have a real conversation about decarceration & prison abolition in this country,” she tweeted. Like I said, awful and unrealistic but she never fails to disappoint.

– Rising fuel prices in Ecuador triggered angry protests. The Ecuadorian government had an interesting response – it left. The short story is the country is broke and had to end subsidies that had been keeping fuel prices down. The government, such as it is, is now operating in a remote location, away from the capital of Quito.

– As long as we’re talking about the consequences of irresponsible government, a gallon of gas in California is now approaching $5. Part of the reason is that the state’s environmental regulations have reduced oil production. Some refineries have even closed. California’s gas prices are the highest in the country. Rising fuel prices, crippling taxes, an out-of-control homeless problem and a median home price of more than $600,000. No wonder people are leaving.

OK, I promised different, not good. And if you still want to hear more about impeachment, you won’t have long to wait.

by Michael Shannon
CNN issued a study a while back that found regularly attending church may increase a Christian's lifespan, while at the same time help "them stay grounded and [provide] spiritual guidance." I'm guessing this positive benefit results from the add ...
MAGA Companies Power Trump Stock Boom

by Phil Kerpen
President Trump has presided over a booming economy and stock market, and trillion-dollar tech companies are leading the way. "For 144 days, we set a record stock market. It means 401Ks, it means jobs. Four trillion dollar companies: Apple, Amaz ...
Nearly All Our Presidents Were Big Baseball ‘Bugs’

by Joe Guzzardi
Out of all our presidents, not many are suspected of being indifferent to baseball. The most notable is probably Thomas Jefferson, who no doubt considered games that involve balls frivolous, and would distract him from his multiple intellectual ...