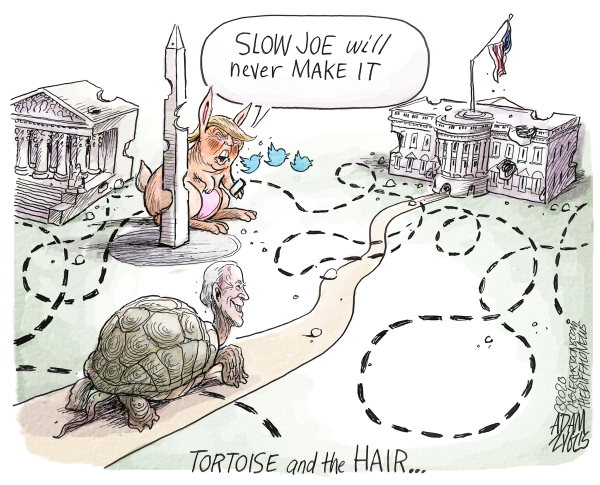 It has become increasingly clear that Joe Biden’s best chance to win the presidency is to remain firmly planted on his basement sectional with limited contact with the outside world for the duration. In fact, if I were running Biden’s campaign, I’d fit the former vice president with a shock collar and run an invisible fence around the perimeter of his basement.

If it works from my Great Dane, it can work for Biden.

The problem with Biden is the more of him you have, the less you want – sort of like caviar. The first bite, “Interesting,” the second, “I don’t know if I like this,” the third, “I think this has gone bad.”

Biden has been given a gift of sorts – chaos.What he mostly needs to do now is stay out of the way, literally and figuratively. President Trump didn’t create COVID-19, didn’t kill 177,000 Americans as some Democrats have charged, nor did he inspire anarchists to take to the streets and occupy sections of American cities, vandalize public property, defund local police departments and topple statues. But it is ultimately his responsibility to reassure the country and restore order. Neither will be easy.

So, for Biden, adopting the George Costanza blueprint for success – “My presence in that office can only hurt my chances” – seems like the way to proceed.Sure, he can do a few interviews for a sympathetic media perfectly content to lob him softballs, but there’s really no need to increase his exposure to daylight at this point.

However – and Democrats beware – Biden has been poking his head out of the turtle shell a bit more lately.

Over the weekend, Biden told ABC’s David Muir that he would lockdown the country this winter if faced with a combination of COVID-19 and flu cases.

In a recent interview with rapper Cardi B, who’s now a journalist (Who isn’t?), Biden offered a couple of juicy nuggets, including the notion that he could offer everyone free college without raising taxes while, at the same time, raising taxes.

“The way we can pay for all of this is doing practical things, like making sure that everybody has to pay their fair share,” he said.

Biden provided some clarity on his tax plan over the weekend. He told Muir that he plans to raise taxes on everyone earning more than $400,000 per year and that wealthy Americans and corporations should pay their “fair share.”

There are those two words again, the most dangerous in the liberal lexicon. There’s no objective standard to determine someone’s “fair share” so it will be applied subjectively, to whomever is deemed – I assume by Biden and the Democrats – too successful.

For Trump’s part, he has to face his predicament and stay on message; remind voters of the campaign promises on which he has made good – deregulation and the appointment of judges, to name a couple. Whether you agree with what he’s done is another issue.

Trump’s approval rating has recently ticked up in key swing states, though polls still show him trailing Biden. Four years ago, Trump campaigned his way, despite criticism from those in his own party. He did want he wanted. He tweeted, he insulted the media, he basked in his own sense of wonderfulness. In the end, he could always say, “I’m president and you’re not. I won doing it my way. All the naysayers were wrong.” In the end, he was right.

But this is not 2016. He’s the president now. He owns the chaos. That’s just the way it is for any president, fair or not. Four years ago, Trump was a novelty, an alternative to both the status quo and the thoroughly unlikable Hillary Clinton. Not anymore. If Trump employs his 2016 strategy this time around, he’ll lose.

What can he do differently? First, he can avoid tweeting nonsense and focus on the issues of the day.

I know Trump views Twitter as a way to circumvent an adversarial media and deliver his message directly to the American people. He’s not wrong, but the incendiary nature of his tweets is a distraction and ultimately fodder for his political opponents and the press.

In 2016, Trump ran an “us vs. them” campaign with the “them” being the establishment, the D.C. swamp, the liberal media and an opponent who represented all of the above. The boundaries were clearly defined. His “Make America Great Again” slogan made sense against Clinton’s lackluster and ambiguous “Stronger Together” message.

But a lot has happened in four years, and if Team Trump doesn’t come up with something that inspires hope and confidence, he’ll be in serious trouble in November.

There’s a reason Biden has remained in his basement. He’s winning and until the gap begins to close, he hasn’t a reason to go anywhere.