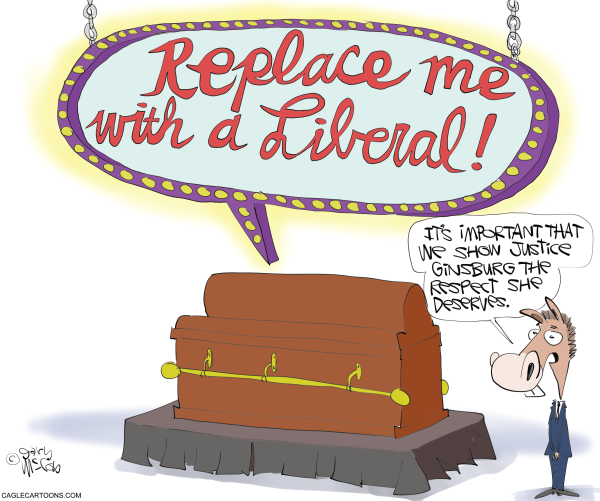 But Trump didn’t say it. It was President Barack Obama in 2013, during a debate about the debt ceiling. In 2010, during the health care summit, Obama reminded Republican Sen. John McCain, that “the election’s over.”

Elections do, indeed, have consequences, one of which is an elected president gets to nominate Supreme Court justices.

Ruth Bader Ginsberg dying before Trump left the White House was the Democrats’ worst nightmare. Well, almost. The worst is Trump winning a second term, which will trigger a level of apoplexy so seismic that the tectonic plates might reshuffle like a deck of cards.

There’s nothing new or precedent-shattering about a president nominating a Supreme Court justice in an election year or during a lame-duck session. It’s happened 29 times and in 17 of those cases, when the president’s party held the senate, the nominee was confirmed.

Trump is well within his rights to nominate a justice to replace Ginsburg, as was Obama when he nominated Merrick Garland to succeed Antonin Scalia who died suddenly in 2016, prior to the election. The problem for Obama was that he had to try to get Garland through the Republican-controlled Senate, which is why Obama nominated the moderate Garland. But Senate Republicans refused to give Garland a hearing. Why? Because they were under no obligation to do so. To be clear, Garland deserved a hearing.

Still, practically speaking, the current hysteria, hand-wringing and charges of hypocrisy by Democrats over Trump’s “timing” are meaningless, as is what Senate Majority Leader Mitch McConnell said in 2016.

“We think the important principle in the middle of this presidential year is that the American people need to weigh in and decide who’s going to make this decision,” McConnell said. “Not this lame duck president on the way out the door, but the next president.”

There’s no real precedent for the timing of replacing a Supreme Court justice, only the unwritten “Thurmond Rule” which said that the senate should stop processing nominees to the federal judiciary in an election year. It’s ironic that Democrats are now waving the informal rule around like a battle flag, considering its namesake, Strom Thurmond, the late South Carolina Republican, would likely make the top 10 of any Democrat’s all-time enemies list.

Should the Republicans push through a replacement for Ginsburg, some Democrats have threatened to add to the number of justices on the Supreme Court – and “pack” the court — should they regain control of the White House and Senate. This would, of course, politicize the court even further, which is the point. This is about politics, after all.

Neither side should be laying claim to any moral high ground here. But I must admit, righteous indignation from politicians – Republican or Democrat – is precious.

“Mitch McConnell set the precedent,” Sen. Ed Markey (D-Mass.) tweeted Friday., “No Supreme Court vacancies filled in an election year. If he violates it, when Democrats control the Senate in the next Congress, we must abolish the filibuster and expand the Supreme Court.”

Indeed, there’s no better basis upon which to make decisions on behalf of the American people than spite, proving, yet again, that Congress earns every bit of its 21% approval rating.

More than anything, this is discouraging, especially for naive idealists who desperately want to believe that the Supreme Court is the last vestige of the republic to remain unpolluted by partisanship.

Worse yet, this will be an ugly, bareknuckle fight to the finish, in front of the entire world. And if the Democrats respond by attempting, again, to impeach Trump, as House Speaker Nancy Pelosi has said is on the table, the ideological chasm that currently divides our country will only grow wider.

Yes, it promises to be a cringeworthy spectacle, perhaps the worst. Unfortunately, only the latest in a regrettable series.