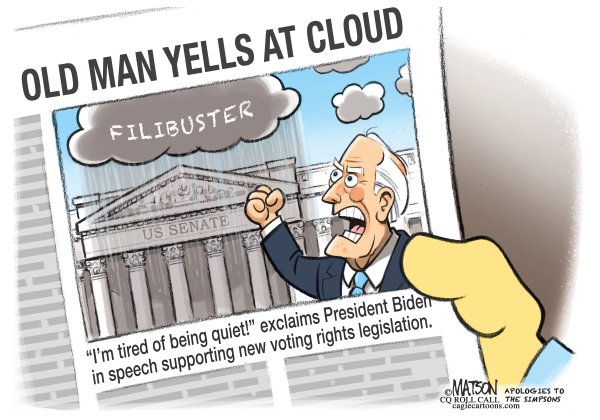 Misspeaking requires some knowledge of what you’re saying. For example, if you meant to order a Diet Coke but ordered a regular Coke because you didn’t specify “diet,” you would have realized, either at that moment or, when you took your first sip, that you misspoke.

In a particularly divisive, Jan. 11 voting rights speech that was mostly awful for a number of reasons, President Joe Biden again referred to Vice President Kamala Harris as “President Harris.” It’s at least the fourth time Biden has unknowingly elevated the vice president.

I’m not sure if anyone has checked the Constitution to see if there’s some obscure provision which automatically promotes the vice president if a sitting president has called the VP “president” a certain number of times. If there is, we must be getting close.

The Biden camp pretends not to notice the error and simply changes the text when publishing the speech transcript. The worrisome thing is I don’t know if Biden notices.

Much like Ron Burgundy, the president will say whatever is in the teleprompter, i.e. his “end of message” regurgitation at the end of speeches, the most recent and unfortunate of which occurred at the end of his eulogy of Sen. Bob Dole.

In my career, I’ve read from a teleprompter and I’ve written a fair amount of speeches.

I can honestly say I never said anything while reading a prompter that wasn’t meant to be spoken. Sure, I stumbled or messed up words, but I never uttered “end” or “pause” or “take package” – all terms that are or were common in a TV news script. I never said any of those things not because I was a genius but because I knew what I was supposed to be saying. I suppose some writer could have slipped “You stink!” in a script to really test me but, thankfully, it never happened.

Biden, at times, will freestyle during speeches. There’s nothing more soul-crushing for a speech writer than to watch his or her boss meander off script and wind up in a rabbit hole from which there is no graceful escape. If the president’s speech writers aren’t tranquilized, they must each be sporting a blood pressure cuff.

True, Biden and Trump are prolific, but they’re not alone.

President Warren G. Harding said, “Oftentimes, I don’t seem to grasp that I am president.” Gerald Ford reflected, “If Abraham Lincoln was alive today, he’d roll over in his grave.” Barack Obama said there were 57 states.

Some, like Biden, are gaffe-prone. Others are masters of malaprop. George W. Bush said his opponents “misunderestimated” him.

The point is presidents are human and fallible. But it’s reasonable to expect that a president should at least know what he’s supposed to be saying.

There’s a reason for this. In fact, there can be only one – Biden’s handlers don’t trust the president enough to expose him to questions. Why? They’re afraid of what he might say. Because he often appears disoriented, inappropriately angry, confused and tired.

A Politico poll in the fall showed that almost half of Americans were concerned about Biden’s cognition. For some reason, Biden, unlike Trump, didn’t undergo a cognitive test during his annual exam. There’s a reason for that too, only one – his advisers don’t want the results. Otherwise, he would take the test, if for no other reason than to put Americans’ minds at ease.

This need not be a partisan issue. The American people – Republicans and Democrats alike –need to know that their president, whether they voted for him or not, is functioning on all cylinders. This is a serious issue that needs to be addressed.

The right to vote must be preserved by Tom Purcell
“Snow day.” Those were once the two most glorious words ever uttered on an early morning radio broadcast. When I was a kid in the ‘70s, it was pure heaven to wake to snow-blanketed hills, then tune into Jack Bogut’s KDKA morning show, pr ...
MLB Lockout: Billionaires versus multimillionaires by Joe Guzzardi
Major League Baseball’s player lockout had no sooner begun than commissioner Rob Manfred sent a letter to fans attempting to assuage ire about the possibility of another partial season – the sixth in 50 years – or even no season at all. Fa ...