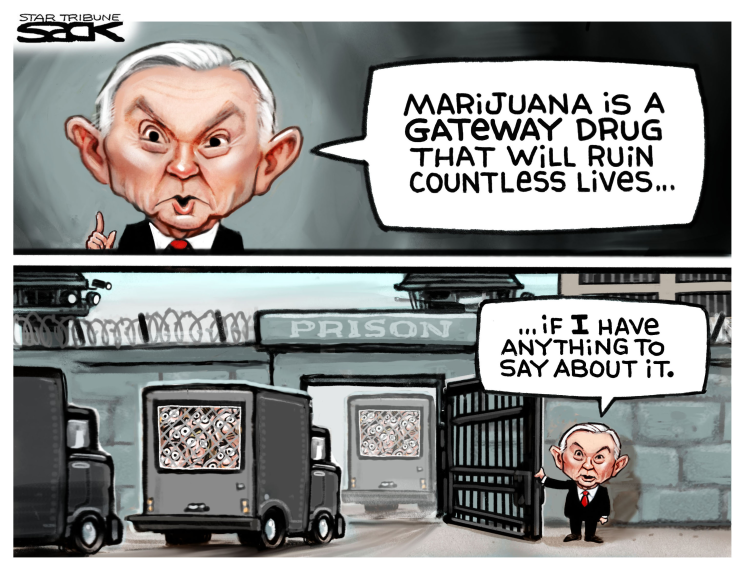 It has become known as a grand parody, though that was not the intent.

When asked about possible effects of legalizing marijuana in Illinois, the players went into full “Reefer Madness” mode, saying it would make the dogs useless and a threat to society, requiring them to give their dogs the “Old Yeller” treatment.

While Larner did not specifically say how he would kill “a number” of his 275 narcotics-sniffing dogs, he made it clear he is prepared to sacrifice their lives on the altar of marijuana phobia.

He told Pantagraph reporter Ryan Voyles, “Because many K-9s are trained not to be social so their work won’t be affected, a number of dogs would likely have to be euthanized.”

Voyles then talked with police in two other Illinois towns who told him what many of you already know, which is that retired K-9 dogs typically live with their handlers. They don’t slaughter the dogs.

Do you think for a minute that if any Macon County dogs are butchered, it’s not because Larner just plain wants to do it?

I made a call to the police department in Seattle, Washington, where their K-9 units have somehow continued to live and do their jobs protecting law-abiding citizens, including those who legally use cannabis.

The official with whom I spoke asked not to be identified. The K-9 unit apparently doesn’t want to be dragged into this nonsense.

When I mentioned the Illinois officer who said that dogs would have to be euthanized upon the passage of legalizing marijuana, he laughed and then sighed.

He also confirmed no dogs in his jurisdiction had been euthanized due to the legalization. These canine professionals are trained to detect multiple drugs and many have additional talents.

He laughed again and reiterated that he was not going to go on the record.

On the record, Jay Casillas of the Denver Police Department told me, “Since marijuana was legalized, we have not been forced to retire or euthanize our K-9s.”

“We do not euthanize our K-9s… Our K-9s are still working, and they continue to be trained on four odors [MJ, cocaine, methamphetamine, and heroin],” Casillas said. “Since the legalization of marijuana, we have slightly changed the training with regard to sniffing marijuana. We now train our dogs to detect larger amounts (10 pounds or more) of marijuana because we still have to address the black market for MJ.

“We retire the dogs when it is necessary and they usually stay with their police handler as their family pet,” Casillas added. “When a K9 is retired, we purchase a new one to take their spot.”

What about that less dramatic and equally ignorant statement in which Macon County Sheriff Buffett said all the dogs would have to be replaced?

Why?Because they could no longer detect cocaine, heroin and other drugs now that marijuana is legal?

Don’t the Illinois trainers know how to train their dogs to detect the large amounts of marijuana still deemed illegal?

Maybe it’s the Illinois officials that need to be replaced or trained by the Seattle and Denver K-9 officers.

Meanwhile, the Illinois dogs would serve the Prairie State well by adding another aroma to their repertoire.

They could add any amount of Buffett’s and Larner’s “B.S.”

The problem with that is the canines within earshot of those two would be too preoccupied to get any real drug sniffing work done.