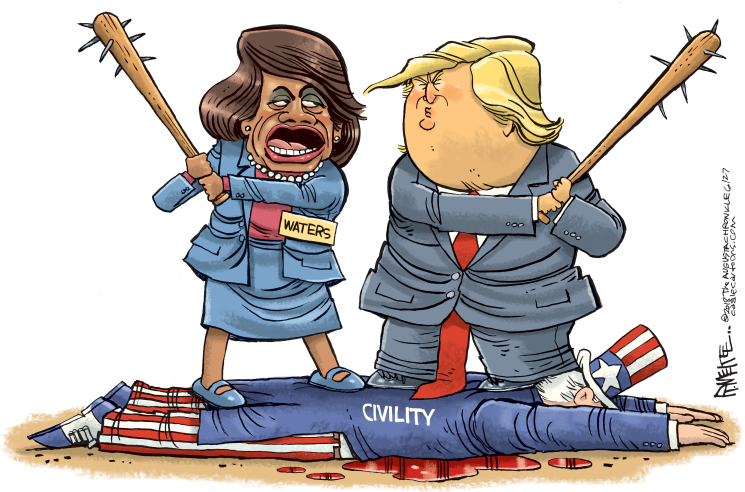 The Democratic Party wants you to be so angry that you are embracing violence and ostracizing everyone who disagrees with your views.

Leadership doesn’t seem to want it to be too obvious.

Rep. Maxine Waters is currently the most vociferous, calling on the party faithful to accost Trump administration employees and “push back” at them, screaming that they are “not welcome” in restaurants, at grocery stores and gas stations.

How this cannot be a call to violence is beyond logic.

After Democratic Party leader Sen. Chuck Schumer, D-N.Y., warned such public calls for aggression could also be used against themselves, Waters feebly evaded the question of violence and pointed to Trump… “don’t let him distract you (the press)!”This is about the children!”

Democrats are reminding everyone that Trump encouraged supporters to “punch” protesters who disrupted his campaign rallies and yearned for the days when such hooligans would be carried out on stretchers.

If the argument is the schoolyard “he started it” theme, then we should all be reminded that Democratic Party operatives bragged on video that they hired criminals to start fights at Trump campaigns. They were paid by the Democratic National Committee and the Hillary Clinton campaign.

Still, the “civil” reaction at the Trump rallies would have been to call out the protesters as paid operatives for the Hillary campaign, but that’s not Trump’s way.

Especially since the “civil” way of the Democrats to disparage their opponent was to hire criminals to find a Trump supporter willing to punch them for videos destined for the nightly news.

This will not end well.

With liberal business owners joyfully telling Trump employees to hit the street, there has already been pushback from Trump supporters in the way of researching business owners’ and employees’ most personal information, such as health records, and publicizing it.

Some of the most scurrilous “information” disseminated online may not even be factual, but that doesn’t matter in tribal warfare.

Each side has their most fervent online “warriors,” certain that they hold the moral high ground.

Indeed, while calling for mobs to encircle, intimidate and physically evict from public spaces any Trump employee, Maxine Waters declared, “God is on our side.”

Question: Was God on “their side” when the Obama administration “ripped” children from their parents caught crossing the border illegally and caging them?

While Schumer is worried about violent right-wingers doing to him what the violent left is doing to Republicans, Maxine Waters basically doubled down on her rant.

Then, last week, an intern for Sen. Maggie Hassan, D-N.H., saw the president in the Capitol and shouted, “Mister President, f#[email protected] you!”

The intern was neither fired nor released from her prestigious position.

While Sarah went home, other members of her family went to a restaurant across the street.The Red Hen owner followed with others in tow, shouting and screaming at the Huckabee relatives, including a brother-in-law who is a liberal.

Florida GOP Attorney General Pam Bondi was forced to call for a police escort to safely leave a movie about Mister Rogers after leftists threatened her at the theater.

Democrat Maxine Waters endorses this, which is utterly stupid.

There are many angry people in this world and Waters is, essentially, yelling, “Fire!” in every theater.

Maybe partisan business owners should just post their preferences on their doors and social media sites to avoid violence in their establishments. Mimicking the American Revolution, big-government Tories (Democrats) and limited-government patriots (Republicans) could post a donkey or elephant on their doors.