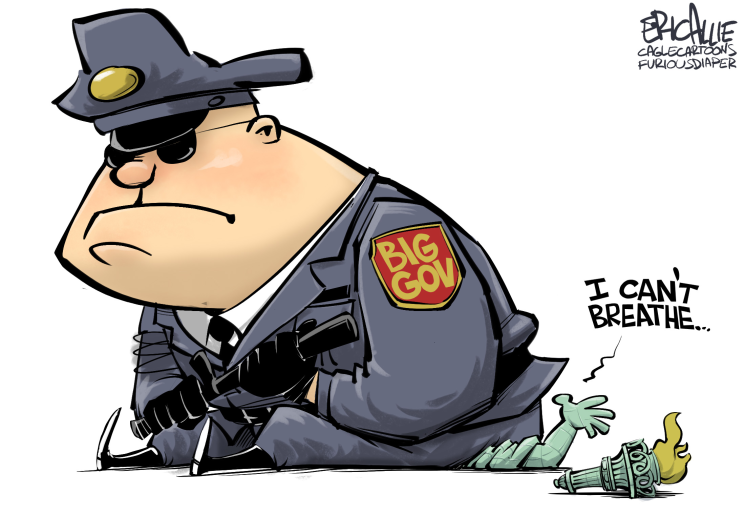 Eric Garner died because a Democratic governor sent the message down the line that New York was losing a billion dollars in cigarette taxes and police needed to get tough on everyone, including the guy on the corner selling “loosies.”

In New Jersey, the Hampton Police Department brought in millions of dollars in 18 months selling cigarettes illegally in a “sting” operation, during which no charges were filed, no arrests were made and police used proceeds to buy SUV’s, electronics and trips to conferences. Thousands of unaccounted dollars were also reportedly withdrawn from their credit union account.

You create a black market for a product by slapping with extraordinary taxes, eventually reducing the amount of tax dollars coming in as people quit buying it. Then the government needs to find new funding for the extra spending that came along with the original short-term tax revenue increases.

Another target for “sin tax” is your vehicle.

This is not an argument for or against smoking or driving enjoyment. It’s just a cautionary tale so you’re prepared to pay twice as much in gas taxes than you do today… but it won’t be the gas that’s taxed.

It will be you.

For years, the federal government has been pushing for higher gas mileage vehicles.So much so that manufacturers figured out a way to sell cars as trucks because trucks are allowed to have lower emission and MPG standards.

Voila!The SUV was invented: a family car built on a truck chassis that’s rated as a truck, bringing the manufacturer’s total CAFE standard in line with government regulations.

In 2004, the EPA decided to hold SUV’s to the same emissions as cars

Then federal central planners decided it would be great to spend billions of taxpayer dollars on electric and hybrid vehicles that use very little or no fossil fuels at all.

Additional pollution from such vehicles’ batteries and their manufacture notwithstanding, millions of Americans agree this is a fine idea and are quite pleased their tax dollars helped their neighbor save thousands of dollars on their Prius.

While you may or may not believe that cars are as evil and nasty as smoking, this has brought us a new problem not unlike the cigarette tax.

Between 2008 and 2014, at least 19 states considered 55 measures related to mileage-based fees, according to the National Conference of State Legislatures. Vermont and Washington enacted bills to study per-mile fees in 2012.

California, Oregon, Colorado and Delaware have equipped vehicles with devices measuring their mileage to test and presumably market the concept.

In Delaware, an estimate by the “I-95 Coalition” states vehicles with varying fuel efficiencies could all pay the same, $10.45 per month based on miles driven.

In their fuel tax estimate, fuel-efficient vehicles getting 25-45 mpg paid about $6.57 per month in gas taxes.

Thus, your expensive Prius will no longer be a gas tax bargain when states enact mileage taxes. Should states actually eliminate the gas tax, a cool 1969 Camaro could be your tax-affordable daily driver.

Then there’s your personal GPS data, which governments will need to track to determine your taxable interstate travel.

More nudging will be required.