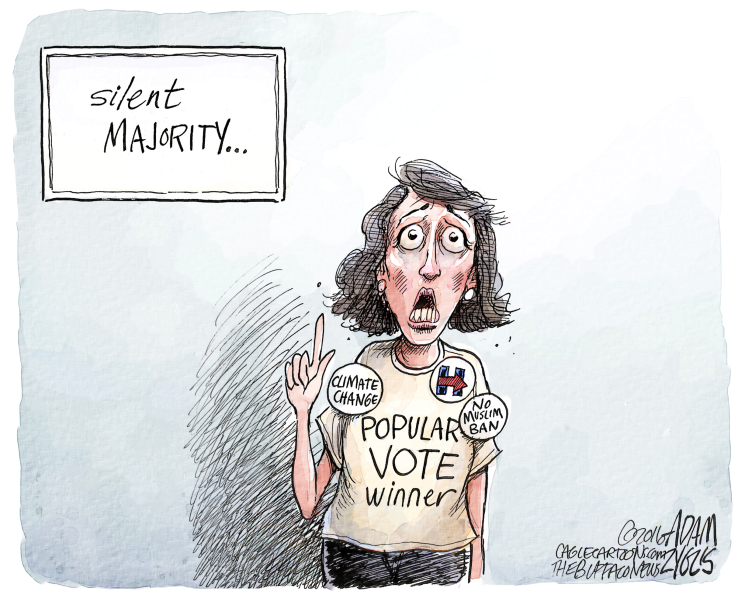 Whether you're Republican, Democrat or Independent, can we agree on one thing? Out of simple fairness, can we agree that the presidential candidate who wins the national popular vote in November - across all 50 states and the District of Columbia - should be guaranteed the presidency?

If you answered "yes", then you stand eye-to-eye with 3,125 legislators from all 50 states who have endorsed the state-based National Popular Vote Interstate Compact that would guarantee the presidency to the candidate who receives the most popular votes across all 50 states and DC - and ensure that every vote, in every state, will matter in every presidential election.

Wait - doesn't the current system already do that? Not by a long shot. Five times in our nation's history - most recently in the presidential elections of 2000 and 2016 - the popular will of the people did not prevail. The presidency was awarded to the candidate who lost the national popular vote, but still won the 270 electoral votes necessary to become president.

Outliers like these are made possible because 12 so-called "battleground" states - states with the propensity to "swing" from one party to another - command nearly 100 percent of the candidates' time, money and attention. The remaining 38 states are largely ignored because candidates see no point in campaigning in places where they are almost certain to win, or virtually certain to lose.

As momentum continues to build, it is increasingly possible that the 2020 presidential election could be the first conducted under the National Popular Vote Interstate Compact, where the winner of the most popular votes across all 50 states and the District of Columbia is guaranteed to win the White House. Fourteen states and the District of Columbia have already signed the National Popular Vote bill into law, giving the Compact 189 of the 270 electoral votes necessary to become effective.

This is how it works: The National Popular Vote Interstate Compact will go into effect when passed by states possessing enough electoral votes to elect the president - 270 out of 538. In December, when electors meet to cast their ballots for president and vice-president following a presidential election, the electoral votes of all the compacting states would be awarded in a package to the candidate who receives the most popular votes across all 50 states and DC.

And let us also be clear that the National Popular Vote Interstate Compact is constitutionally conservative, and maintains the Electoral College.

The Constitution allows states to form compacts for all kinds of reasons. And Article 2, Section 1 of the Constitution leaves the choice of how to award electoral votes to the states, stipulating: "Each state shall appoint, in such Manner as the Legislature thereof may direct, a Number of Electors ... "

It is also important to note that the state-level winner-take-all method of awarding electoral votes is not part of the Constitution - nor was it debated at the 1787 Constitutional Convention or mentioned in the Federalist Papers.

Simple fairness dictates that every voter in every state must count equally in choosing the President of the United States. That is what the National Popular Vote Interstate Compact is all about, and with it, we have a very real opportunity to make 2020 the year that every state becomes a "battleground" state.

Silberstein is a member of the board of National Popular Vote and the founder of Innovative Interfaces Inc., one of the world's leading suppliers of computer software for the automation of college and city libraries. You can reach Silberstein at [email protected]