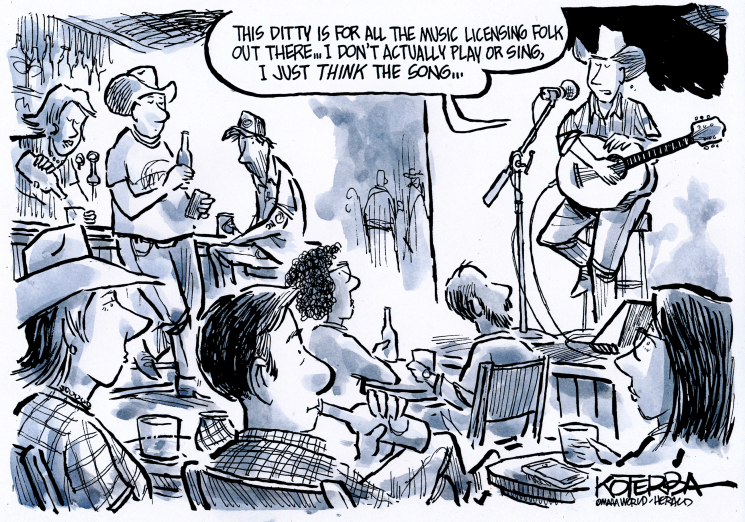 Editor Note: A prior version of this column was distributed by Cagle Cartoons in 2014. If you run this column, please mention that it is an excerpt from Tom Purcell’s humorous book, “Misadventures of a 1970s Childhood,” available at Amazon.com.

It sat in my parents’ dining room for 30 years or more: an old oak stereo console with large speakers concealed by green fabric. It filled my childhood with a harmony and clarity we could use lots more of about now.

Sundays after supper, the sweet smell of coffee and pot roast and pineapple upside-down cake still in the air, my father (the Big Guy) loved to play his favorite albums on it. He liked Barbra Streisand in those days. He loved Herb Alpert & the Tijuana Brass. And he’d go nuts when he played “The Stars and Stripes Forever!” by John Philip Sousa.

He’d turn the volume high and begin marching through our small house, lifting his legs and arms high and making exaggerated faces the way comedian Red Skelton did with his Clem Kadiddlehopper character. We’d jump from the table and follow behind him, marching and laughing until tears filled our eyes.

That old console played nonstop during the Christmas season. Our stack of records usually began with the “Holiday Sing-Along with Mitch Miller” followed by “Christmas with the Chipmunks.” Then came “Snoopy vs. the Red Baron” and Bing Crosby. As soon as Bing finished, we restacked the albums and played them again.

My mother used the stereo more than anyone. She loved to listen to it while working around the house. She loved to whistle, too, a habit she learned from her father (and one she passed along to me).

Hers was a high-pitched whistle – the sound of a happy robin singing on a sunny spring morning – and she could harmonize with most tunes. Sometimes she tuned in to an AM station that played Frank Sinatra and Dean Martin. Other times she’d play her Doris Day album. I still can hear her whistling to “Que Sera, Sera.”

I’ve been thinking about the old stereo console lately. I’ve been longing for the sweet, simple music that it brought into our home – a simple harmony and clarity for which the world is in desperate need.

There is so much yapping and shouting on television and the radio. There is an obsession with Don Imus and Anna Nicole, and every yapper under the son is beating both stories into the ground.

And while the experts weigh in on the idiotic statements uttered by Imus, few criticize the words and images on so many other channels that are 20 times more vulgar and demeaning; few are critical of so many real woes we face in a culture becoming more crass and cynical by the minute.

The shouting and hooting and hollering has gotten so loud, it’s getting hard to hear anymore – it’s getting hard for folks to distinguish between what is worthwhile on the tube and the radio and what is garbage. This must be the case. Why else would so many crude, silly and stupid programs litter the airwaves every night?

Some weeks – a week just like this one – I just want to escape it all. My family doesn’t have the old stereo console anymore, but I did buy a new turntable recently. My mother’s cousin gave me dozens of old albums she no longer listens to and I’ve been working my way through them.

Human nature and the world were messy then, too, but the noise level was much lower. There was no cable then – no channels to allow the yappers to yap. The average citizen was certainly a lot more civil then than the average fellow is now.

Perhaps we’d all be better off if more folks started collecting old albums – if more folks tried re-creating the simple childhood memories of the old stereo consoles that once sat in their parents’ dining room.