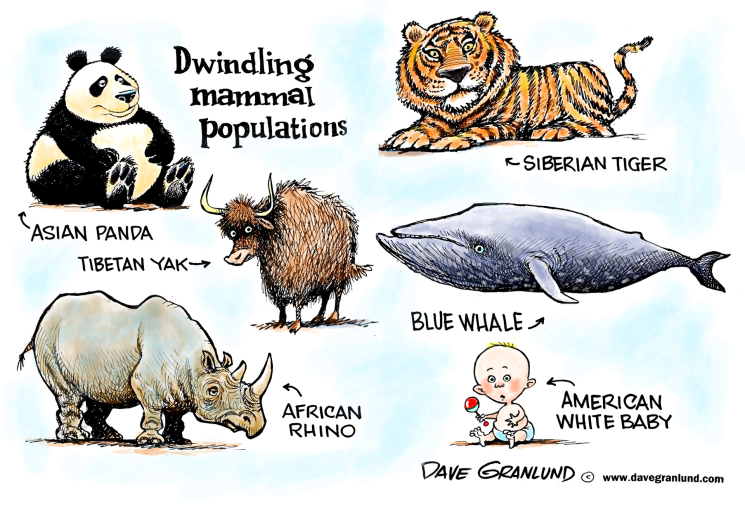 America's declining birthrate has given me pause.

According to the Centers for Disease Control and Prevention, the number of babies born in the United States in 2018 was the lowest in 32 years, continuing what NBC News calls "a decades-long trend toward fewer and fewer babies being born each year."

That means fewer young people to support an increasingly aging population. Hey, young people! We need you to have kids who'll pick up our Social Security and Medicare bills 15 or 20 years from now!

But it also means today's children won't know what growing up was like as part of America's baby boom - in families packed with kids, filling neighborhoods with unending liveliness.

The post-World-War-II economic boom fueled Americans' optimism and hope. The future looked brighter than ever.

Adults married younger and started families sooner. Like my parents, many wanted big families - even with all the craziness and conflicts that happen when you pack many siblings into a modest-sized home. And with a little scrimping and saving, parents were able to afford a big family on a single income back then.

Unlike today's kids, I was free to roam, play and discover on my own with my siblings and friends. Parents didn't micromanage our every moment. They weren't terrified when we weren't in their sight. They MADE US go play outside - but woe to the kid who was late for dinner!

Millions of us - the luckier ones - lived in new homes in the suburbs. We had dozens of friends. We built shacks and forts with wood commandeered from sites where still more homes were being built. We rode our bikes miles farther than we ever admitted to our mothers.

We dammed creeks to make swimming holes, built our own go-karts and skateboards, and played games of our own making until the streetlights came on - our signal to get home right away.

Many of today's children won't ever know such freedom - in part because many of today's parents don't share baby-boom parents' optimism and hopefulness.

Despite a strong economic outlook, accounting firm Deloitte's 2019 Millennial Survey finds young people "are pessimistic about the economy, business and their own progress," The Economist reports.

Deloitte says the No. 1 cause of millennials' pessimism is climate change.

But they're also burdened by college-loan debt that makes marrying, buying a home and starting a family more difficult than it was for prior generations.

My parents started their family young and broke in 1957, but at least they weren't saddled with thousands in debt.

My parents were excited and eager for a future that - with six kids, 17 grandkids and nine great-grandkids - sure has turned out bright.

The truth - according to Forbes, based on a study by University of Oxford economist Max Roser - is that "on virtually all of the key dimensions of human material well-being - poverty, literacy, health, freedom, and education - the world is an extraordinarily better place than it was just a couple of centuries ago."

In other words, now is as good a time as any in human history - and better than most - to have children. And we sure could use another baby boom to help pay for our aging population's mounting financial obligations.

Besides, having a lot of siblings is great fun.

An only boy, I was forever getting on my five sisters' nerves. They reported my shortcomings to our parents - until I devised a scheme to stop them.

I threatened to use their toothbrushes!