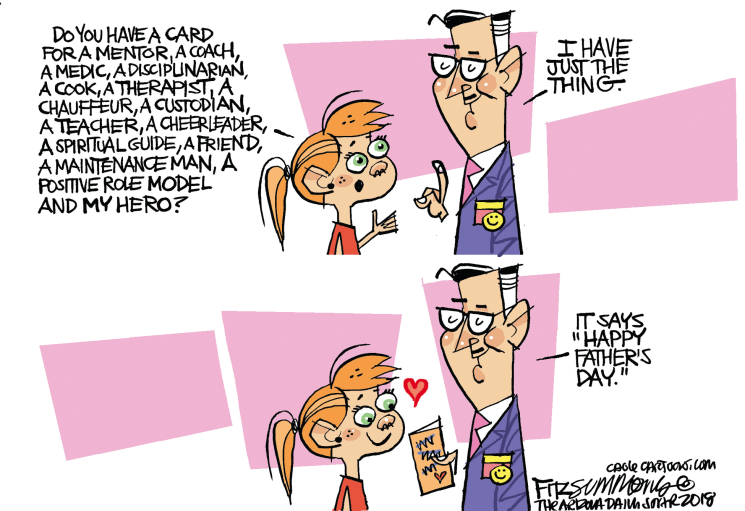 My dad turns 86 next month. He never thought he'd live so long - or see as many Father's Days as he has - because his parents both died far too young.

A stroke claimed his mother when she was 69 - the same night Pittsburgh Pirates great Roberto Clemente's hurricane-relief plane went missing.

It was the first time I'd ever heard my father sob.

My dad's father was only 34 when he died in 1937. My father, then just 3, lost half of his universe. His dad had a great job as an accountant for the Mellon family. His early death greatly altered my father's future.

My dad's mother had to work full-time to make ends meet, leaving him to fend for himself on city streets.

Often unsupervised, he got into some trouble - once, a stone he set on the tracks nearly derailed a trolley car - but sports saved him.

His high school football coach shaped him into a championship running back - while serving as the father figure he ached for.

And then, after a baseball game he'd played, my father met my mother.

When their eyes met on that afternoon 68 years ago, it was lights out for him.

When football scholarship offers rolled in, my father couldn't bear the thought of four long years away from my mother.

Not even Chuck Noll, then captain of the University of Dayton football team - who'd coach the Pittsburgh Steelers to four Super Bowl wins - could persuade my dad to leave her behind.

My dad never desired great fortune or fame. He didn't need to be a corporate executive or public figure. All he wanted was to be with my mother, start a family with her and build a life.

He worked hard for Bell Telephone for nearly 40 years. He and my mother would be blessed with six children, 17 grandchildren and nine great-grandchildren - and counting! - amid the many ups and downs that a long marriage and a large, extended family bring.

He'd tell you his life is unremarkable - that lots of men made the choices he made. But I disagree.

Never a man big on words, his actions always have spoken loudly.

He worked long hours to support us, but never kept more than $5 a week for himself - to buy a couple of cups of coffee.

He made clear his devotion to our mother, and to us. He and my mother gave us a deep sense of security that he never had as a child.

His five daughters all married men with the same sort of character and integrity that still guide his existence, and their children have embraced these important traits, too.

My dad still pays his bills and his taxes on time. He never took a loan he didn't repay. He coached baseball and served his church.

And all along, he desired only his family's love and well-being - and a few ice-cold Pabst Blue Ribbons - as rewards.

Fathers like my father make magnificent contributions to their families and our world. Great civilizations are built on their shoulders.

Yet they see their selfless support, guidance and nurturing of their families as "unremarkable" - which makes them all the more extraordinary.

That's why, this Father's Day, I want my father to know just how remarkably "unremarkable" he is.