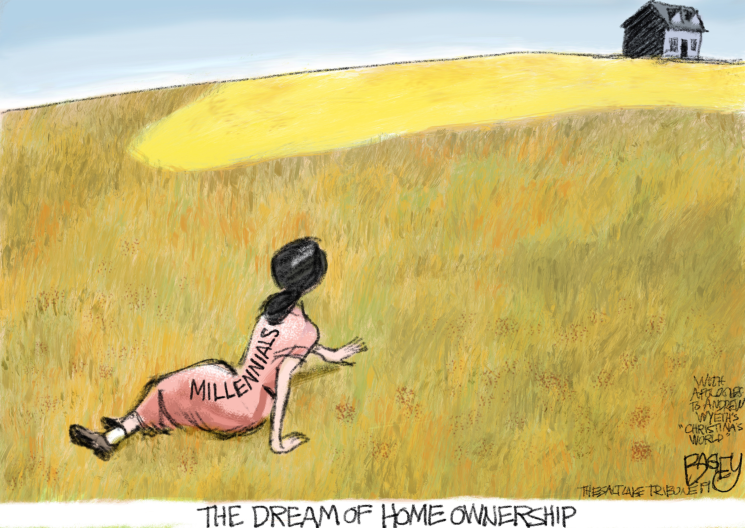 Why do I want more Americans to buy homes? Because misery loves company.

The Wall Street Journal reports most American renters believe homeownership is financially out of their reach - only 24 percent say it's "extremely likely that they would ever own a home, 11 percentage points lower than four years ago," according to a Freddie Mac survey - and that isn't good for our country.

For starters, homeowners' net worth is higher than renters' - for the simple reason that mortgage payments, unlike rent payments, eventually build thousands of dollars in equity.,

Homeownership is good for the economy - because many homeowners are always looking to improve their abodes with new furnishings, landscaping materials, construction supplies and so on. ,

Studies reveal that homeowners fare better than renters. According to Forbes, "children of homeowners do better in school ... . Health outcomes are also better with homeowners." Homeowners also "are more likely to be involved in community civic engagements, local elections, and volunteer work compared to renters ... ."

Homeownership has certainly made me a more involved citizen.,

I bought my first house in 1996. I was a freelance writer - which means I was broke. All I could afford was a fixer-upper, on a hill in the country, that made Herman Munster's place look like a Trump estate.,

I was full of vigor at first, but several failed projects - the toilet seal that never stopped leaking, the broken septic tank lid, the furnace that wouldn't heat, etc. - eventually made me very grumpy.,

One day, while weeding the planter, bees attacked me. Someone told me the solution was to pour a cup of gasoline into the bee hole, then light it. I poured in two cups for good measure, lit a match and dropped it in.,

I quickly learned an important lesson about gasoline: Gasoline doesn't burn - gasoline FUMES burn. Because they're FLAMMABLE - especially when you turn a hole in your planter's dirt into a massive carburetor.,

I heard the giant "WOOOOF!" of gasoline fumes exploding. I saw a 15-foot flame shoot up the side of my freshly painted house. It's amazing I didn't burn the whole neighborhood down.

In any event, such miseries are borne only by homeowners. They make us participate in local politicians' meetings to keep them from raising our taxes.,

Homeownership miseries make us participate in state and federal elections to stop those politicians from - for instance - ruining washing machines. Thanks to new water-use restrictions, new washing machines barely wash.,

In any event, despite homeownership's many miseries, I began buying rental properties, subjecting myself to the misery of having tenants. Tenants never cease to amaze me with the items that - along with my hard-earned money - they think they can flush down a toilet.,

Owning properties has made me a better citizen - but a miserable one. I want as many Americans to share my homeownership miseries as possible.

To that end, I recently became a licensed real estate agent in Western Pennsylvania, so I can help other people buy their own homes - and increase the number of people I can commiserate with.