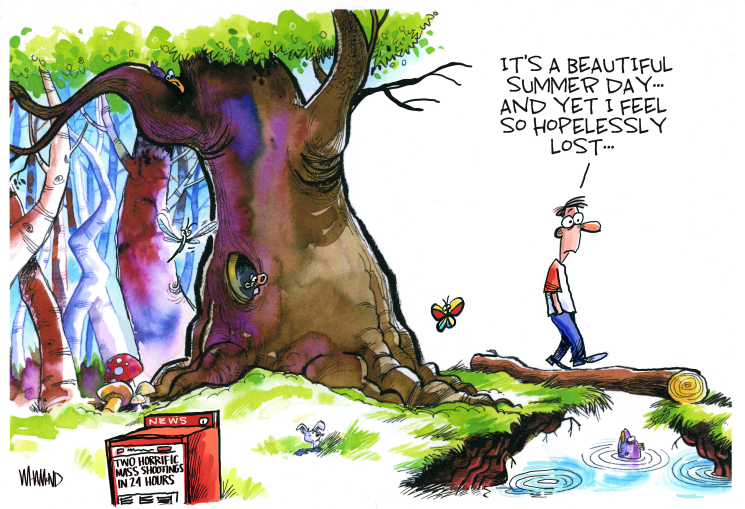 Twelve years ago, when I first visited the Little Sisters of the Poor (LSP) retirement home in Pittsburgh, I was overcome with peace and calm.

I went there to write about a retiree, Gorman Johnston, and his dog, Abner. I wanted to get the interview over with quickly on that bitter-cold Sunday afternoon, so I could get home for a nap.

Gorman had been a longtime volunteer at the home, repaying the Sisters’ compassion and excellent care for his mother in her final years.

In 2007, Gorman, then in his 80s, lost his wife, Doris, to a long battle with cancer. He’d spent so much time doting on her, he wasn’t aware he had his own health challenges. His doctors told him to move into an assisted care residence – but what about his dog, Abner?

The Sisters had a solution. Gorman was able to move in and a married couple, who volunteered at the home four days each week, adopted Abner. They brought Abner whenever they visited, so Gorman could spend quality time with his beloved dog.

After finishing the interview, I politely asked my host, Sister Regina, for a tour of the home – hoping she would decline so I could head home.

LSP was founded in France in 1839 by Jeanne Jugan, who dedicated her life to the aged poor who could no longer care for themselves. She established a new religious community devoted to her mission, with an elderly, blind and paralyzed woman as her first houseguest.

As Sister Regina led me through the home, I was struck by the laughter and camaraderie on every floor.

Residents helped clean up after dinner. Several cheerfully asked if I wanted coffee or tea or a cookie.

Even in the infirmary, where people were near their end, joy was abundant.

“Everyone,” said Sister Regina as we entered the infirmary, “Tom is writing a column about our home.”

A woman in a wheelchair with an IV taped to her arm waved me over. She could barely talk, but said to me, “God bless you for telling others about the wonderful people who care for us here.”

Sister Regina introduced me to Nick, a barrel-chested 93-year-old, who also had an IV taped to his arm.

“Nick has a wonderful voice,” she told me. “Nick, would you like to sing for us?”

He nodded, then belted out a classic Sinatra tune so powerfully it felt like Ol’ Blue Eyes himself was there. Everyone in the infirmary applauded.

When my hour-plus tour ended, I didn’t want to leave. I was filled with an incredible sense of peace and calm. Cheerfulness and happiness abound at all LSP homes. God’s presence is strong there.

LSP is continuing its Jubilee Year celebrating the 150th anniversary of the religious order’s arrival in America. A visit to an LSP home near you can provide a break from the growing cynicism and incivility of modern life – just like my 2007 visit to the Pittsburgh home did for me. LSP is always in need of donations and volunteers, too.

Believe me, whatever time or support you give to LSP, you’ll be repaid triple in return.

Baseball Great Babe Ruth Beat Spanish Flu… Twice
by Joe Guzzardi
In 1918, an influenza panic much like today's COVID-19 struck the nation. The Spanish flu, as it was often called, killed at least 50 million victims worldwide, and 675,000 in the U.S. Then-Surgeon General Rupert Blue summarized how suddenly the ...
Worrying about My Not-So-Worried Parents

by Tom Purcell
My sisters and I worry that our 83-year-old mother and 86-year-old father aren't nearly as worried about COVID-19 as we are. Though this pandemic is as unique as it is unnerving, they tell us they've experienced plenty of unnerving events. Born ...
When to Pull the Plug on the President?

by Peter Funt
Responding to public demand and civic responsibility, the three major cable TV channels - Fox News Channel, CNN and MSNBC - have essentially become all-coronavirus, all the time. But increasingly the outlets face vexing questions: When should th ...