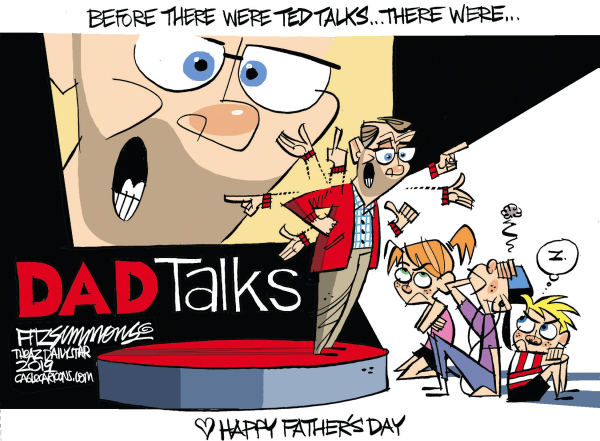 Need to learn how to unclog a shower drain, jump-start a car, shave your face without bleeding to death or successfully address dozens of other practical adult daily activities?

Rob Kenney offers this kind of basic “dad advice” and millions are tuning into his YouTube channel “Dad, How Do I?” to hear it.

Kenney, who promises his subscribers he’ll do “my best to provide useful, practical content to many basic tasks that everyone should know how to do,” told Buzzfeed he began making YouTube videos after his 27-year-old daughter would call him “with countless ‘adulting’ questions.”

“Every day she was calling me and ... I thought, ‘What do other people do when they don’t have that resource?’ ”

Kenny was painfully aware of what it was like to lack a fatherly resource. His parents divorced when he was a child and his father won custody of Kenny and his siblings.

But when his father walked out on the family in 1978, when Kenney was 14, he and his brothers and sisters had to learn “the ropes of adulthood” by themselves, reports the HuffPost.

Prodded by his daughter’s endless “how do I” questions, Kenney created a YouTube channel that teaches young adults the basic life-lessons he missed out on growing up without a father in the house.

Boy, did his video posts strike a chord.

In only a few weeks they went viral. Kenney currently has nearly 3.5 million YouTube subscribers, proving there’s clearly a hunger for the simple “dadvice” that he provides.

My father will be 88 soon and he still tells me about the hunger he has for his father, who died in 1937 when my dad was only three — a hunger I’m unfamiliar with because I am still blessed to have my dad in my life.

After his father died my dad's mother had to work full time to afford their modest apartment and, unsupervised, my dad was getting into mischief until the football coach persuaded him to join the high school team.

The coach became my dad's father figure and helped shape him into the solid, reliable dad he would one day become — as well as one heck of a great running back, who would later be inducted into his high school’s sports hall of fame.

My mother’s father also helped shape my father. Grandfather Hartner was a pattern maker and highly skilled with tools.

He understood everything about cars and houses — how to keep a car in tune, fix light switches, repair plumbing, etc. — and he taught my dad the useful skills he’d one day need to keep his busy, 8-person household running smoothly.

My father in turn passed those handyman skills down to me as he helped me to renovate my first house, a complete fixer-upper I was not afraid to buy because of the resourceful dad (and mom) I knew I could rely on.

My dad also taught me how to make sensible decisions managing and saving money and dealing with people — sometimes not very honest people — in business situations.

I feel bad for the kids who lose their dads early, as my dad lost his. I applaud Rob Kenney for helping such kids learn the basic daily skills they need as adults.

I’m eternally thankful for being blessed by my dad’s powerful presence and the practical knowledge he still gives me on how to navigate life’s challenges.

Dad, thanks for teaching me how!