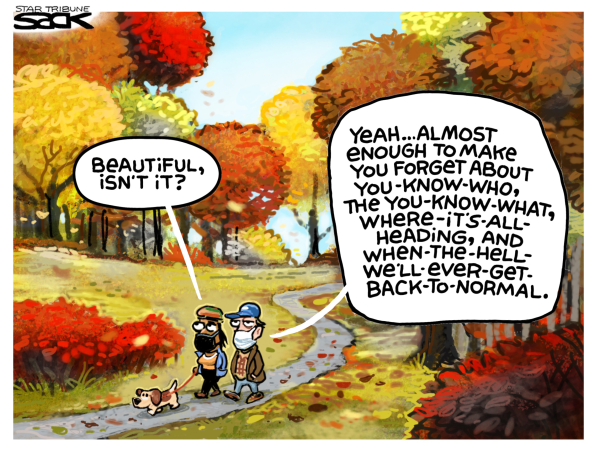 The autumn leaves are expected to be extra vibrant this year in Pennsylvania, though they are changing colors a week later than is normal.

According to Merriam-Webster, “autumn” is “the season between summer and winter comprising in the northern hemisphere usually the months of September, October, and November.…”

Autumn is also defined as “a period of maturity or incipient decline.”

Fall has always been my favorite time of the year. The chilly air and vibrant colors fill me with calm.

This time of year I become especially reflective about my life and my future, but I also reflect about our country and its future.

Political discourse and basic civility grow worse by the day. Just follow the news — if you can bear it.

Our massive federal government is demonstrating massive incompetence on a host of issues — the Afghanistan pull-out, the Southern border, gigantic proposed spending bills — yet a growing number of voters seems to think a bigger, socialistic government is a dandy idea.

America’s systemic optimism is hitting new lows, as a majority of us believe the country is heading in the wrong direction.

Is it really autumn for America? Have we reached a period of maturity and incipient decline? I hope and pray it isn’t so.

I’ve long believed you should never bet against the resilience, ingenuity and productivity of the American people. But in this reflective time of year, I admit that I have a growing sense of unease about our country’s future.

It’s best if you try to focus instead on the many enjoyable events that autumn brings: hayrides, hot apple cider and the entertaining haunted house venues that are back in business after covid shut them down last year.

It’s best to marvel at the creativity and hilarity of the characters and costumes people come up with for their annual Halloween party — the one social event, or at least it used to be, at which adults can really let themselves have fun.

As far as characters and costumes go, I increasingly identify with the “oddest” character in the 1960s sitcom, “The Munsters.”

The Munsters are a family of silly monsters: Grandpa, an eccentric vampire; his daughter, Lily, also a vampire; her husband Herman, a Frankenstein monster; their son Eddie, a werewolf.

The Munster who’s the oddball in the family is their niece, Marilynn, who is considered plain and unattractive by Munster standards because she is a normal, attractive woman by traditional standards.

With so many supposedly normal characters in Washington attempting to pass the largest government spending bill in U.S. history, you can feel like an oddball yourself for suggesting that some of the measures in the bill are way too radical and way too costly.

In fact, fewer American “oddballs” — people worried about the country their children will inherit — are willing to share their thoughts in public.

According to a 2020 Cato Institute survey, 62 percent of us say we hold political views we’re afraid to share — with good reason.

Freedom of speech has long been the very foundation of our country, but a majority of Americans are now afraid to exercise it?

That sad fact has become the new normal in America.

And that’s a lot more frightening than the scariest haunted house anyone will enter this autumn.