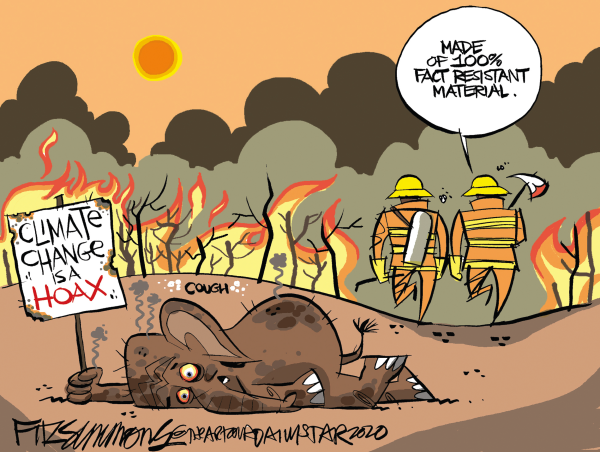 My dog Thurber has been lying to me.

It only figures, because it’s impossible to avoid mistruths these days.

We just exited a miserable election cycle in which truth stretching, name calling and vote pandering were all in high gear — and inescapable.

Our politicians in both major parties really know how to lie.

They know most Americans disdain complexity and want to hear promises that resonate — even false ones.

The politicians always promise they’ll make these impossibilities happen if we vote for them.

We know they’re lying to us — and we’ve learned to count on it. But politicians aren’t the only ones fibbing out there.

Our cable news personalities pretend to be after the truth.

But in fact they spin whatever yarns are likely to generate the most ratings — and to heck with the anger and division their “reporting” causes.

From our country’s beginning we've had our share of liars, snake-oil salesmen and flimflam artists.

These scoundrels weren't judged on the rightness or wrongness of their scams so much as the skill with which they pulled them off.

The sorry truth is that Americans want to be lied to.

We're suckers for a skillfully told yarn that puts us at ease and helps us sleep better at night.

But my dog, Thurber, is spinning yarns, too?

Part of the reason I love my puppy so much, I had thought, was because he was a refuge from the adult world of mistruth.

But then I stumbled upon an Animal Cognition study that found that dogs, too, are capable of lying to get what they want.

In the study, researchers trained 27 dogs to differentiate between a “cooperative” woman who allowed them to have their favorite treat and a “competitive” woman, who did not.

Dogs were taught how to lead the two women to three boxes: one contained sausages, their favorite treat, the second contained dog biscuits, and the third was empty.

When dogs were asked to “show me the food” they would lead their partner to one of the three boxes.

The cooperative woman rewarded dogs with whatever was inside the box, but the competitive woman kept the treats if the dogs picked a box with treats inside.

So what did the clever canines do? They almost always led the cooperative partner to the treats and the competitive partner away from them.

In other words, dogs can be as cunning and deceitful as the rest of us, which is beginning to explain a lot about Thurber.

Let me give you an example.

When he looks me dead in the eye and gives a soft whimper, he’s telling me he needs to go Number 1.

The same look accompanied by a soft moan means he needs to go Number 2.

But sometimes he pretends he has to “go” 1 or 2, just so I will let him outside to play.

What else is he lying to me about, I wonder?

Where he hid my glasses? The TV remote? My checkbook?

Somebody cashed a check for $1,000 recently and the signature looked an awful lot like Thurber’s paw print.

My point? Mistruths are running rampant these days.

Even our dogs are lying to us.

Purcell, creator of the infotainment site ThurbersTail.com, which features pet advice he’s learning from his beloved Labrador, Thurber, is a Pittsburgh Tribune-Review humor columnist. Email him at [email protected]