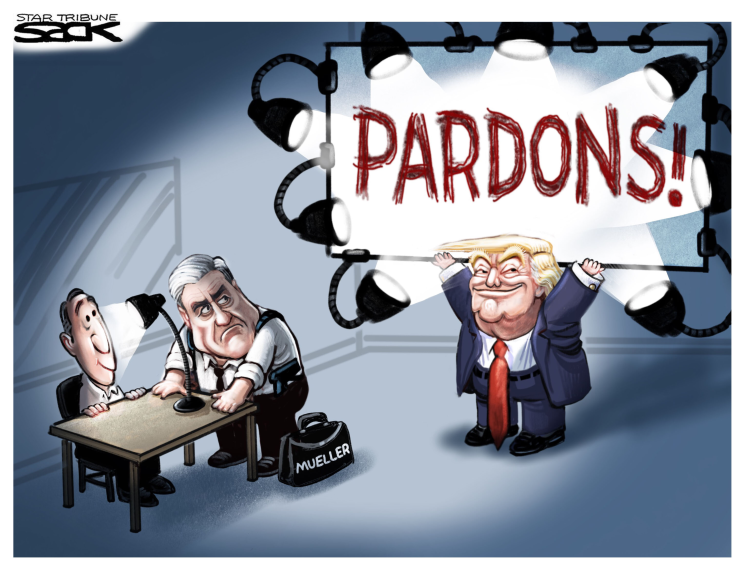 We now offer up a few choice words concerning the continuing investigation being conducted by Special Counsel Robert Mueller, and those words are: Happy Birthday baby! You are now one whole year old. Who’s the big boy? Why, you are. You’re the big boy. Yes, you are.

Traditionally, the present for a first anniversary is paper, but you don’t need any more of that, considering the voluminous file cabinets full of documents already collected and stashed in triple-locked, humidity-controlled warehouses all over the leaky swamp that is Washington. There’s also the promise of more witnesses o’plenty to be interviewed, including some grifter named Donald Trump.

The modern alternative gift is a timepiece, but that can’t be a need, as half the civilized world keeps reminding you how late it is while pointing at their watches and clocks encouraging a modicum of alacrity. Conservatives want it over the same way liberals want the administration over. Everyone’s looking for closure.

But we all know there is no timetable for justice. This could be your first at bat in an extra-inning game. Might just be “A- Atrocity” in the Encyclopedia of Malfeasance. The initial downbeat of a drumstick at a 24- hour, jam-band concert featuring Phish, Widespread Panic and Dave Mathews.

One unintended consequence of your tornado of an investigation is it’s spawning other sister twisters. The Southern District of New York spun off its own study into the affairs of Trumpian lawyer Michael Cohen, who seems to have as many grisly secrets as the Demon of Fleet Street’s cellar.

Thus far, 19 people and 3 companies have been charged with crimes including a national security advisor, 13 Russians, a couple of random aides, the son-in-law of a Russian billionaire and the president’s former campaign manager. 5 guilty pleas have been entered which means the chances that people are talking their heads off is about equal to that of finding seagulls in a dumpster behind a fish cannery.

The President insists the whole thing is a “witch hunt, witch hunt,” probably referring to a case of mass hysteria, not implying he is the victim of witchcraft. Although, he does seem a bit agitated by Robert Mueller’s Evil Eye not to mention intimidated by his freakishly large hands.

The administration’s designated barky dog, Rudy Giuliani, claims Mueller hopes to wrap things up with the obstruction charge by September 1st. That could be either wishful thinking or a public announcement to goose the Special Counsel into pooping or getting off the pot. Fish or cut bait. Jump or don’t.

Some are waiting for you, the birthday boy to tire out and take a nap while others are counting on you to perp-walk the entire Trump administration into federal custody with trench coats draped over their handcuffs. No pressure. Happy Birthday Investigation Being Conducted by Robert Mueller. And many mooooooooore. Blow out your candle big boy. Who wants cake?