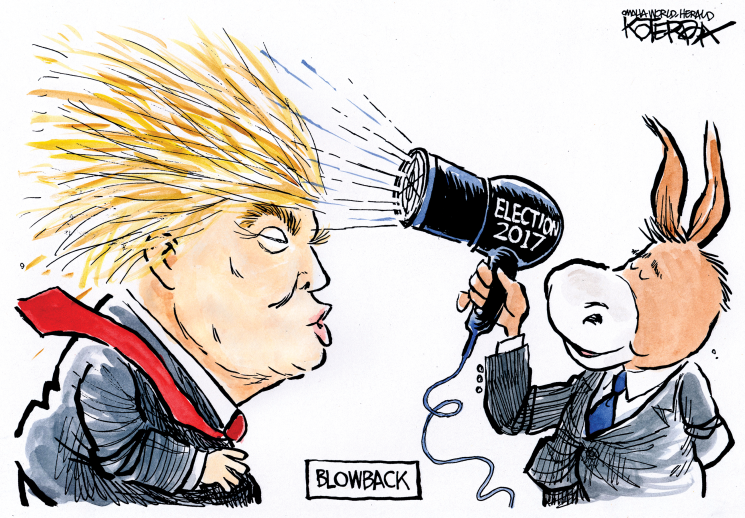 Many readers have protested this column’s tiresome history of taking cheap shots at the expense of our 45th President. So today we reverse that distressing trend and endeavor to travel the high road with an in-depth analysis of one of the most critical problems confronting the nation today. His hair.

Normally, focusing on a person’s physical characteristics is considered out of bounds, and just not cricket, but because Donald Trump’s favorite weapon is denigration, we’ve decided to play by his rules. He’s the one who has called opponents; , “a slob,” “short and fat,” “crazy,” “ugly,” “the face of a pig” and of course, famously mocked a disabled guy. The new rules are that there are no rules.

Besides, you could say the very key to the man is his golden canopy. Look at it, no, really, give it a gander: everything about it is wrong. The color. The shape. The texture. The intended result. The scalp underneath. How, in the rotor wash of the Marine One helicopter, it reaches for the heavens like a sentient shrubbery signaling a secret society of Navajo Code Talkers. Not to mention his unshakeable and groundless belief that it looks good.

In his unique aerodynamic coif, we can see Donald Trump’s entire philosophy of leadership. The Tangerine Combover can be viewed as a microcosm of mane. His propensity for false fronts. Not caring what anybody else thinks. Reliving past triumphs. Railing against common sense and decency. Brash, uncompromising, slightly surreal and totally cut off from reality. It’s all there.

America has questions and it’s time our Commander-in-Chief answers them. What is it really on his head? A wig, a weave, implants, extensions, a merkin, Tribble, carpet sample or a piece of pelt from the belly of a marsupial? Remnant of an especially beloved therapy animal?

Does he wash it, dry clean it or have it regularly replaced through a subscription service? Is it housebroken or need to go outside for a walk twice a day and does he have to sing or rock it to sleep? Also, who carries around the antidote in case that thing stings somebody?

And, despite using modern technology and being afforded the privilege of the office, exactly how much time does it take to recreate his groovy haircut from the Master of the Universe 80s? With drastically fewer resources?,Got to be at least a half-hour every day. That means three and a half hours a week. And he’s been president for 70 weeks, which works out to be 245 hours. A little over 10 entire days.

Think of the things that he might have accomplished with an extra 10 days. He could have fired five or six more Communication Directors. Bungled more foreign relations with allies. Maligned a larger amount of Cabinet members. More time for tete-a-tetes with Sean Hannity. “You hang up.” “No, you hang up.” Played another 40 rounds of golf.

Barbers and hair stylists around the world also have a burning professional desire to know how to achieve that frontal swoop. Hair spray? Stitches? Staples? Scaffolding? Stainless steel rivets? Glue? That would explain a lot. He’s had that haircut since getting out of military school. Sniffing glue for that long cannot be good. No, not good at all.