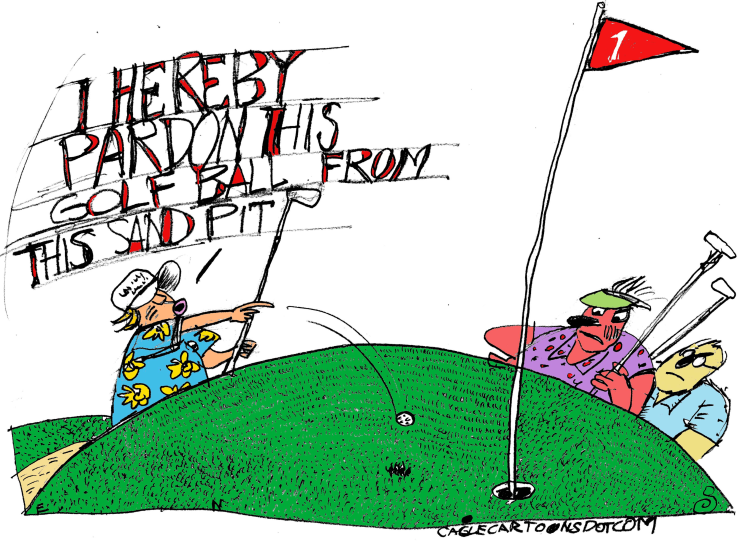 The president’s lawyers must wake up every morning wondering if they’re in the throes of a mescaline fever dream. Which altered reality will they have to deal with today? The legal ground melts out from under them and scary hallucinations swirl around mutating versions of the boss: the Donald Trump who changes his story more often than his underwear and the one who tosses away members of his legal team like used Kleenex.

They recently sent a letter to the Special Counsel asserting that Donald Trump is above the law. Not to be confused with the first Steven Segal movie, “Above the Law.” Although the two do have much in common: both think Vladimir Putin is a great guy and they are in similar physical condition these days.

The argument is the president cannot commit obstruction of justice, because as chief law enforcement officer of the United States, he is the justice department. . Not only incapable of committing a crime but incapable of being held accountable. Laws are for losers. Take the knee and kiss the ring.

The President tweeted that many legal scholars say he has the absolute right to pardon himself, even though he won’t need to because he hasn’t committed any crimes. Similar to a “Get Out Of Jail Free” card, only better. More like a “Get Your Stinking Paws Off Me, You Damn Dirty Ape” sort of thing.

The good news is he probably won’t wear a crown and risk messing up his aerodynamic coif. But other royal trappings are imaginable: golden jewel-encrusted scepter, floor-dragging ermine trimmed robe and the serial discarding of wives who can’t provide a decent hereditary successor. And yes, Don Jr. and Eric, we’re talking about you.

He claims to possess special powers that immunize him from criminal prosecution. Apparently he was bitten by a radioactive spider at Camp David. And is willing to admit that everything he ever previously said in public was a lie. Wasn’t under oath, so it doesn’t count. And if he does lie under oath, who cares? Who’s going to arrest him, Jeff Sessions? Dream on.

His defense has shifted more than the sands of the Kalahari during one of those windstorms they call a haboob. And speaking of boobs, Rudy Giuliani says the Deep State is framing the president and he might take the 5th if questions about crimes he didn’t commit get too close to disproving that.

Trump’s lawyers also claim the president is too busy to answer questions, although the Supreme Court knocked down that claim when Bill Clinton invoked it, and he didn’t spend one- sixth of his presidency at a golf courses. One tenth, maybe.

They’re throwing up alternative defenses like hyperactive Rhesus monkeys flinging feces at a zoo. Not only can’t he be constitutionally prosecuted but the prosecution is a conspiracy. The FBI is full of jack- booted thugs and his hands are too small to fit on the Bible. Can’t wait for them to float the diminished capacity defense. That one might be easier to sell.