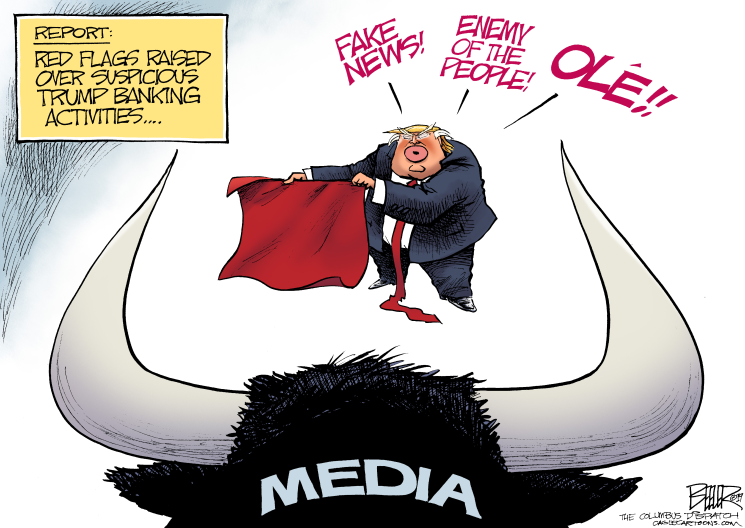 One thing you've got to give Trump is the Oval Office occupant knows his way around a misdirection.

Every day the magnificent media magician manages to conjure up some wacky stunt, verbal flub or piece of shocking news designed to distract the spotlight from his staggering pile of emerging scandals in the manner of sawing a lady lobbyist in half in the front glass lobby of a children's library.

A partial chronicle of his repertoire consists of name-calling, fact-mangling, verbal burps, Russian hugs and making stuff up while denying stuff that everyone agrees on. Accompanied by loud crashes, bright flashes and "Breaking News" slashes, syncopated to the drumbeat of that sound that hypnotizes him, his own name "Trump... Trump... Trump."

Standing next to the Japanese prime minister, the president of the United States praised North Korea's beloved leader Kim Jong Un for sharing his opinion that a possible rival to his second term, Joe Biden, was a low I.Q. individual. He tweeted the same thing and misspelled the Democrat's name as "Bidan." It would be funny if only it weren't.

Earlier, Trump walked out of a Congressional meeting on infrastructure with Nancy Pelosi and Chuck Schumer because the Speaker had the temerity to suggest he was engaged in a cover-up. This precipitated a reaction that many referred to as "over the top." And over the top for him involves a lunar landing.

"Cover-up" hardy sounds antagonistic considering he's been accused of obstructing justice, being an agent of a foreign power and a man who puts kids in cages. Maybe he thought it was a swipe at his hair.

In response, Trump again called himself "an extremely stable genius", this time forcing staffers to line-up and describe how stable he was, out loud, in front of cameras, or else. Which, on the creepy scale, registered in the high teens and made walking the last mile look like a skipping stroll to an ice cream truck.

The man is an absolute expert at throwing bright shiny objects, which the press and public chase after like golden retrievers lunging for steak-flavored frisbees. So, what else can we expect to divert us from the various investigations, subpoenas and jailed advisors that will soon be targeting him? Glad you asked.

- He'll get the Secret Service to round up all the dismantled Confederate statues and reassemble them on the South Lawn.

- Kellyanne Conway and her husband will get into a fight and throw a lamp that sails over the South Portico while Donald is holding a press conference in the Rose Garden.

- Puerto Rico will be sold to a Russian oligarch giving residents 4 months to get out. But not here.

- McDonalds builds a personal private franchise in the basement of the West Wing.

- For a third time he will announce he wants to form a cyber- security task force with Russia.

- Eric Trump will quit whatever he does in the White House and go back to college.

- Donald Trump will announce his A1C diabetes results are off the charts. The highest of any human in the history of being alive.

- He'll start a war with Iran.

- He'll scrap the plan to put Harriet Tubman on the $20 bill and replace her with Ivanka.