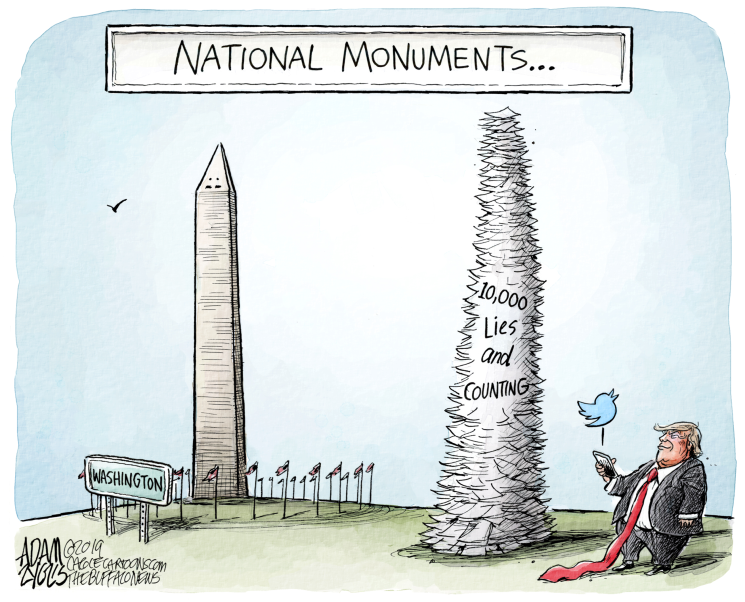 President Trump has been called many things. A short-fingered vulgarian. Mister Misdirection. The Cheater-in-Chief. Vlad's ventriloquist dummy. Boss Tweet. Herr Gropenfuhrer. The Oval Office Oompa Loompa. But the most apropos moniker to throw at him is, the King of Lies.

According to the Washington Post, the former New York City real estate developer is closing in on 11,000 lies since taking the Oath of Office. Which occurred approximately 900 days ago, averaging out to a bit more than 12 lies a day. And that's in public. We have no idea how many lies he tosses towards staff or family or himself.

And yes indeed, you are correct, sir: "liar" is so pejorative. Let's call him a serial fibber. A fabricator. Deceiver. Falsifier. Prevaricator. Pseudologist. But whatever you call it, Donald Trump is the undisputed heavyweight champion of lying. Holds the Guinness Book World Record for making stuff up. Orange-man speak with forked tongue.

Some lies are political, ie; claiming he was against the Iraqi War when multiple examples of him saying the opposite exist. Some lies are just to pump the brand such as when he said the head of the Boy Scouts called to say he gave the best speech ever at a national gathering, something the Head Scout said never happened. Some lies are pure animal instinct. To maintain and move on. Going to release his tax returns after his audit. Longest... audit... ever.

Others are inexplicable. What reason would he have to say his father was born in Germany when the man was born in New York? Nobody cares. But he keeps saying it. Perhaps simply a little self-delusion to reinforce his love of sauerkraut?

If ever caught in a lie, he just denies it. Even though there's tape of him saying it out loud. In a press conference after Helsinki he said he didn't see any reason why Vladimir Putin would interfere in our elections and after everyone, including his own staff, flipped out, he said, what he meant to say was, "he didn't know why he wouldn't have," which doesn't make any sense.

In a recent interview with George Stephanopoulos he said he didn't see anything wrong with accepting dirt on opponents from foreign powers and that he would do it again. The very day after the interview aired, he said he never said that.

The man is responsible for more bad lies than all of his golf courses put together after a month-long strike by the groundskeepers. He goes so far beyond pathological liar, psychologists are going to name a new condition after him. Karma mandates it be something that comes with a nasty rash.