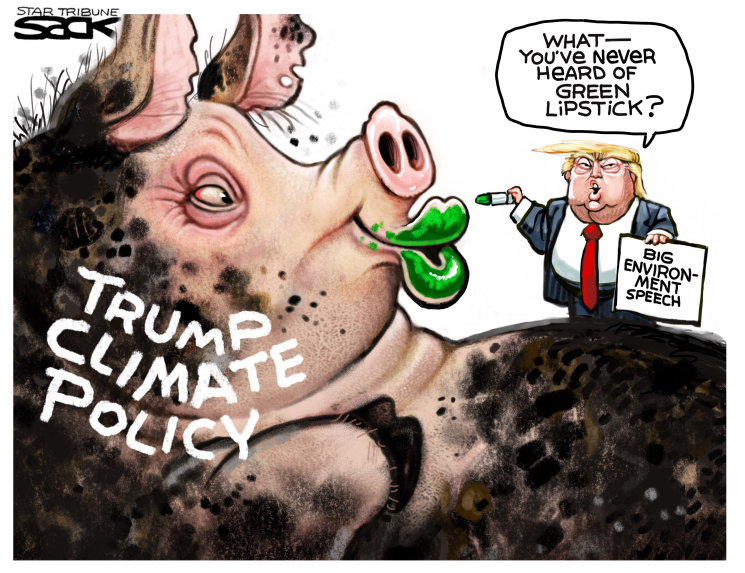 In a recent speech by the president, the former golf resort magnate claimed his administration had done more for the environment than any other presidency, ever. Yes, he did. He said that. Out loud. He trotted out some facts and figures and studies to support his wacky assertions and managed to convey a deep condescending concern with a fairly straight face. Well, a fairly orange face. A very organic color for a Florida fruit.

You know what this means, of course: that we have officially passed through the looking glass. Trump the Environmentalist. It's delusion spiced with confusion caused by contusion. This man must be stopped before he hurts himself and/or us. Someone get one of those white canvas jackets with the way too long sleeves that tie off and buckle up in the back and put it on him. Soon. Please.

The 45th POTUS has undoubtedly been the single worst thing to happen to this planet's climate since that asteroid killed all the dinosaurs 65 million years ago. This is the guy who said wind turbines cause cancer and wildfires can be prevented by sweeping under trees. He is to Mother Nature what alligators are to nests of baby ducks.

He bragged about gains in air and water quality made by regulations he has subsequently gutted and claimed credit for clean air statistics based on scores compiled before he was elected. He pulled us out of the Paris Accords, stripped scientific climate data off government websites, rolled back over 80 Obama- era environmental regulations and called climate change nothing but a Chinese hoax.

And you know that if his good buddies in the fossil fuel industry asked, he would gladly open up drilling anywhere: in the Arctic, in Central Park and on his daughter's forehead. Well, Tiffany anyway. Donald Trump promoting the environment is like an avalanche petitioning for trees. Like the Demon Barber of Fleet Street advertising with customer testimonials. Like William Barr talking about justice. Adolph Hitler endorsing a Holocaust museum.

And why has the man who declared bankruptcy six times undertaken this sudden 180-degree, vertebrae- snapping turn with the attempted greenwashing of the White House? Very simple, it's all about the red versus the blue and winning the next election. With more than a little green for money involved.

His base doesn't matter, they wouldn't care if he outlawed shade. But someone on Team Trump must have informed the president that kids and independents consider the environment a major issue and his regressive policies and ludicrous denials and stubborn refutation of science may have electoral consequences come next November.