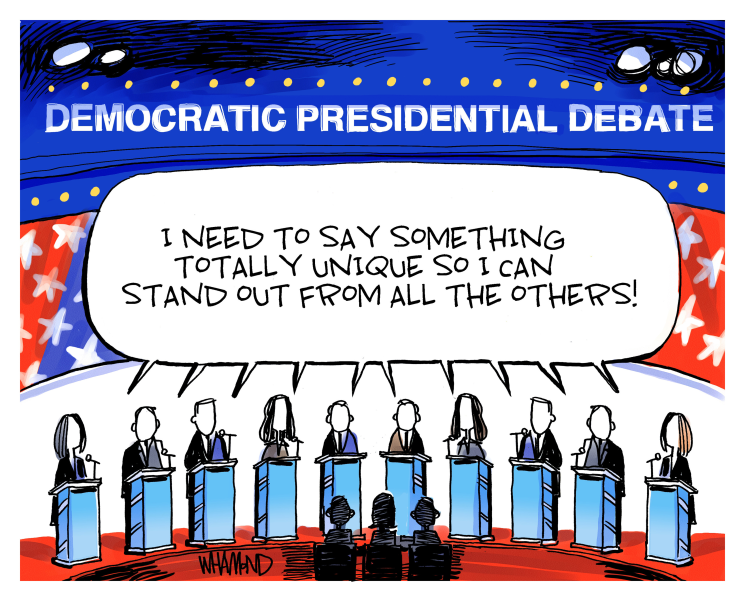 Nobody knows what the earliest word used by humans was. The general consensus is the Sumerians developed the first written language around 3500 BC, using wedge-shaped symbols called cuneiform. Scholars hypothesize that the first word was either “ouch” or “me,” although “pie” had to have been up there since the shapes surely reminded the Sumerians of it.

For the last 5,500 years humans have spent lifetimes searching for the best words to communicate. The precise word can make the difference between understanding and confusing people to the point of banging their heads against metal railings until blood drips out their ears. It doesn’t help that individual words can have many definitions, such as “gross,” which can mean… icky, large, 144 or the thought of Mitch McConnell naked.

President Donald Trump claims he knows the best words, though while he keeps saying he’s got them, curiously, we never get to see or hear them. 45 obviously realizes how precious they are and keeps them locked up in order not to waste them. Along with his best people.

The Democrats’ think they have some pretty good words, too, and trotted out some superlative ones in the debates last week. As we have learned, those words can be inspirational, aspirational, confrontational, nondenominational or generational, but are definitely not necessarily connected to reality. And as predictable as finding blueberry muffins the size of aspirins at a breakfast buffet.

Writers strain mightily to use not just good words, but the very best possible ones, and most books are just different rearrangements of those words. All 20 of the Democratic candidates apparently read the same book because they squawked out the same exact things, behaving not unlike well-groomed parrots.

Each and every one of them is pro-good and anti-bad. On the side of the angels, not the demons. The cops. Not the criminals. Looking to go to heaven, not North Korea. They unanimously stand against cancer, love families and puppies and think we should plan to start at the beginning.

Education? Yes, indeed. You bet. They’re big fans. Corruption? Nope. Not in favor one bit. And on that you can quote them. The future? That, my friends, is yet to come. And something we must all work towards. Together. Because working together is the only sure path to tomorrow.

They hate hypocrites and revere the clergy. And their thoughts and prayers are with us in El Paso and Dayton and everywhere else that needs to be strong. And we need to get rid of the guns. Okay, just the bad guns. What? Wait. Oh, sorry, never mind, erase that.

And we’re definitely going to need more free stuff, like tuition and child-care and a guaranteed income. But we also should have a strong defense and border security and a powerhouse economy and clean air and water. You know what this country needs: more good stuff. And less bad stuff.

So let’s get to it, shall we? How? By working together.

And then we can have pie.